We Never Say I

I am terrified of public speaking. Well, not ANY public speaking, I suppose… If I’m sitting with a group of people, I’m almost certainly going to be one of the more vocal members of the group. A lot of the time, it’s easier for me to talk than it is to stay silent. I have this annoying disease where I believe that the things I have to share are really important for people to hear. And, in my defense, sometimes the things I have to say ARE important for people to hear. At least I’m more aware of my tendencies now…

It was only *slightly* less annoying than this. And yes, I realize I’m dating myself by making a “Welcome Back Kotter” reference…

Once, in college, a professor made a rule that I could only share or ask questions two times per class… And the class was an HOUR AND A HALF LONG CLASS. And let me clarify–It was not that “people” could only share or ask two questions per class. Her rule was that I SPECIFICALLY–Chris Boeskool–was limited to raising his hand twice per class. I was one of about four guys in the class, and she felt my strong, male voice was silencing the female voices there. There were times when she would ask if anyone had any questions or comments, and she would look out over the class and see no one’s hand raised but mine–purposefully not make eye contact with me–and then say, “No one? Nobody?? Okay then, let’s continue.” Looking back on it now, it is so funny to me. I totally deserved it. Anyway, there’s probably a good chance that anyone who has has ever been in a class or a discussion group with me might find it hard to believe that I am scared to death of public speaking.

He also said, “There are only two types of speakers in the world: The nervous and liars.”

But there’s a difference between discussing something and preparing something to talk about. In a discussion, if–at any point–I figure out that I don’t have anything to say or add, I can just not say anything. But if I’m the one at the podium, and I come to that same conclusion, I’m completely. Screwed. Unfortunately, I am self aware enough to know when I’m bombing… And that feeling–the feeling of bombing–is just about the worst feeling I can imagine. This is why if I have to present something in front of a group, it’s always been easier for me to stand up and present with other people. If it’s just me up there and everything falls apart, “I” failed. If I’m part of a group where everything falls apart, “WE” failed. And “We failed” is a lot easier to handle than “I failed.” “We failed” allows me to disperse the shame between the members of the group. “I failed” is all on me.

“I always wondered why somebody didn’t do something about that. Then I realized… I AM somebody.”

I have recently started noticing this tendency in myself… This “We” cop out. Turns out I do it with “You” as well. At the end of the above paragraph, I initially wrote, “‘We failed’ allows YOU to disperse the shame between the members of the group. ‘I failed’ is all on YOU.” Which is a completely different statement. I do it all the time. And it’s usually when I’m discussing something about which I’d prefer to have the responsibility spread between more people than just me. It happens in my marriage as well. If there is something that needs to get done in our home, and both of us are vegging out on the couch, it is a lot easier for me to let that thing go undone. Because it wasn’t MY responsibility… It was OUR responsibility. But if I’m the only one at home, and that “something that needs to get done in our home” doesn’t get done, then it’s nobody’s fault but my own. “We failed” seems easier to handle than “I failed,” but is there really any difference? 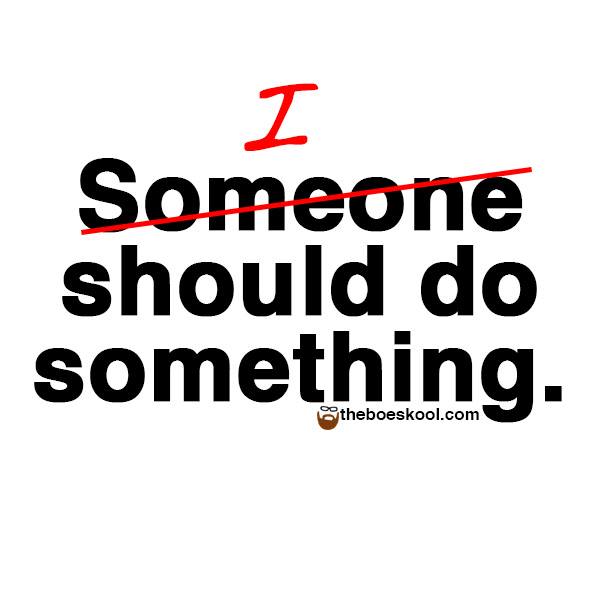 I can’t control what WE do… I can only control what I do. Being part of the “We” can sometimes even REDUCE the likelihood of someone taking action to help someone out. There is evidence of this in groups. If someone needs help and there is a group of people around, I sometimes assume that someone else is better qualified to help out. Or that somebody else is in control. Or else I decide they probably don’t want my assistance. And then I miss the chance to be there for somebody who really needed me. There is certainly strength in the power of a group of people working together toward a common goal, and there are all kinds of sayings praising the power of a group–Like the Native American proverb “Many hands make light work,” or the Bible verse “A cord of three strands is not easily broken.” But as true as those sayings are, the real power of a healthy “We” is a bunch of committed “I’s.”

So my challenge for you today–if you feel like accepting a challenge–is to pay attention to the times you diminish your own responsibility for your actions (or lack of actions) by using the words “you” or “we,” when really what you mean is “I.” And even though this won’t be a magical fix to turn you into the sort of person who takes responsibility for your actions, it is still true that words have power. There is a big difference between saying “I need to do something” and saying “We need to do something.” And I have found that a cool thing happens when I am more conscious of the words I use: I start holding myself accountable for what I say. If I can’t make a commitment without spreading the responsibility between the disengaged “We” or the disconnected “You,” maybe I don’t care as much as I thought I did.

There’s a famous story that tells about how “The Times” invited essays on the topic “What is wrong with the world?” The story goes that G.K. Chesterton wrote back the famous terse response:

Chesterton also used the response “I am” when The Times asked “What is wrong with men’s hairstyles?”

Hey! If you feel like supporting this blog, you can DO THAT HERE. We’re getting closer to getting a page with no ads (which is fun). Also, the only way these posts get read by more people than you is if you share them. I’ve decided that people who give on PayPal can designate a post, and I’ll use your money to boost that post on Facebook. This way, the posts which you care about can be exposed to more people. Thank you to Kelley Waite, for valuing what I do enough to give to help support it. You rock!

7 Responses to We Never Say I