I’m not what you’d call a “Handyman.” I didn’t grow up with a dad who was particularly interested in teaching me about fixing things around the house. I was more of a “sitting on the garage floor, hitting things with a hammer” sort of kid… On a related note, it turns out if you fold a bunch of caps on top of each other and hit them with a hammer, you can make a really loud noise. When I was little, my interests were primarily in catching things in the ponds across the street, watching movies on HBO I probably shouldn’t have been watching, and playing video games… Followed later by playing sports, writing music, and trying to convince girls I was cool enough to kiss. Nowhere in this rigorous schedule was there any time for me to learn how to replace a garbage disposal, hang drywall, repair a leaky faucet, or fix an electrical problem.

I just realized I don’t have an actual tool belt… But Christmas is right around the corner.

But like many of us do, I got married and bought a house. And like everyone who has ever bought a house learns, things in houses break. Now… There are some folks who–when things break–have “people” who fix those broken things. I am not one of these folks. I’m the guy who doesn’t really know what he’s doing, but tries to do it himself. I’m not sure how I became that guy., but the reasoning for my own attempted foray into the role of handyman is not that important. It could have come as a result of newfound home-improvement ambition, a lack of money to pay a repairman, or a good ol’ fashioned Dutch sense of “I’m not going to pay someone for something I can do myself” (Though it was probably some sort of combination of the three). All of this to say, buying a house has led me to discover a place that I genuinely love: ACE HARDWARE.

This is basically what it’s like when I go into Ace.

So here’s the deal: I’m not going to make some impassioned plea for people to stop using “Big Box” stores and do all of your shopping locally. There are a lot of good reason to buy locally, but I realize that, for many people, spending more money on an item just because it makes you “feel good” is not a luxury many of us have. I am not going to try to guilt you into shopping a Ace Hardware based on some sort of Anti-Walmart, “Big = Bad” philosophy. I sometimes shop at Walmart, even though I don’t feel very good about giving them my hard-earned money. I don’t particularly enjoy spending money anywhere, actually, but Ace Hardware is one of the few places I feel genuinely good about handing my cash over to. Here’s what I AM going to do: 1) I’m going to give you a few really good reasons to spend your money at Ace Hardware, 2) I’m going to tell you a quick story about me being a dip shit, and 3) I’m going to ask you–especially if you’re a person like me, who is trying to figure out this home repair stuff as you go along–to give them your business.

Reason Number One–The people who work there actually seek YOU out.
The people who work there are friendly, and that is worth a lot. You can be in Lowes or Home Depot for a good half hour without having an employee so much as even make eye contact with you. When you walk into Ace Hardware, someone is looking to help you. There have only been a couple times that I have ever walked into that place when I have not been immediately greeted and asked how I could be helped. All of those times the employees were helping other customers… And even then, I was acknowledged, and they said they would be right with me.

Reason Number Two–They do more than they have to.
They don’t point you toward the right aisle… They TAKE you to the right aisle, and then they make sure you have the right tool for the job. This has saved me so much time. I have had salespeople give me their cell phone number so that I could send them a picture of the issue I am having at home. Everyone on their staff is so knowledgable, but if there is a question you have that the salesperson in unsure of, they will take you to the person who DOES know. All of this extra service leads to the third reason…

Reason Number Three–They will save you money.
I know some of their prices are a little bit marked up compared to Home Depot or Lowes, but in the long run, you will SAVE MONEY by bringing your business to Ace Hardware. An example: I brought in a valve from my shower that was leaking really bad… fully expecting to have to buy another one. The salesperson could have just showed me where the replacement valves were (about $20), but instead, he asked to take a look at it. He took it apart, explained what was happening, and sold me a 38¢ rubber washer that fixed the problem. After I hugged him, he probably wished he would have just sold me a new valve. And yeah, you probably could have bought that washer for 32¢ at Lowes, but it would have taken you 4 minutes to walk to the area you thought it was in, 7 minutes to get the attention of someone working there, 8 minutes to find the washer, and a half hour to make the trip back in to the store after you get home and figure out you got the wrong size.

Reason Number Four–They know what they’re talking about.
And here’s the story of me being a dip shit. Earlier this year, I went in to Ace Hardware looking for help. In the “Help Area” (did I mention there is a help area?), Shannon (one of the guys who helped me in the past) was helping an older lady figure something out. Even though there was a woman who worked there standing nearby, I positioned myself next to him in that “I’ll stand here and wait for you to get done helping this other person, but I call dibs on next” posture that I’m sure they’re so familiar with. Shannon noticed me waiting, and he said, “Hey. Kay should be able to help you.” “Do YOU think you can help?” I condescendingly asked. I proceeded to talk to Kay like someone I didn’t expect much from… Complete with an actual “I’m not sure if you know what I’m talking about or not.” Like a dip shit… Like a total chauvinist dip shit. I guess I must have missed this commercial in 1982.

Within moments, Kay had made it clear that she had probably FORGOTTEN more about home repair than I would ever learn in my lifetime. She was an expert, and she sent me home with specific instructions of what to look for, and ended up saving me probably $15 and 90 minutes of my time. This is Kay:

I don’t know who you are, but I’d be willing to bet that Kay knows more about hardware than you do.

When I came back in, this time I waited for Kay. I thanked her for her expertise (the kind of expertise that knows the brand of plumbing fixtures they probably used in your neighborhood), I confessed that I looked past her and expected less of her because she was a woman, and I asked her to forgive me. She said, “If I had a dime for every time some guy walked in here and overlooked me because I am a woman, I’d be rich.” She told me stories about customers saying things like, “I’ll just wait for one of the men,” just to have that male employee come to her to ask for her advice… Because she’s been doing this for 27 years. She told me stories about teaching women how to repair broken toilets their husbands couldn’t fix, and then–when their husbands got home and asked how she got it working again–telling the wife to say nothing more than, “I fixed it. It’s not that hard.” 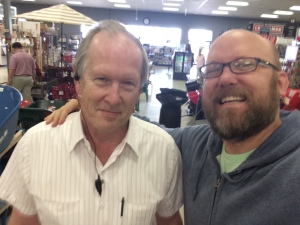 This is NOT Kay. What… Doesn’t everybody take selfies with the folks at their local hardware store???

All of this to say–I LOVE Ace Hardware. I should mention that the store I love the most is the Tusculum Ace Hardware in Nashville, but I know that there are other great stores around as well. You go in there and get a short college level courses in home repair, you get friendly, knowledgable, “measure twice–cut once” people who are eager to help, and you even get lessons in the lurking patriarchy still buried in your own heart… All for the price of slight mark up over Home-Stupid-Depot. And even a dope like me, who didn’t know the first thing about fixing all the crap in my house that breaks, can feel confident–between YouTube videos and the friendly folks at Ace Hardware–that I can fix just about anything that goes wrong with my house.

I don’t advertise on my page… I don’t get paid to, at least (you can probably see some small ads under this paragraph, but those are how WordPress is able to offer this site for free). I’ve been wanting to do some free advertising for a while, and I kept putting it off. Every once in a while, I’m going to do these “free advertising” posts about things I think are awesome (The next one will probably be about Darn Tough socks–The best socks in the world). Anyway, if you love yourself some Ace Hardware, feel free to share this. Or, if you love yourself some The Boeskool, you can BECOME A PATRON and help support me. If everyone who regularly reads my stuff gave $2 a month, that would be way more money I could spend at Ace Hardware.

This entry was posted in 5) Not Quite Sure and tagged Ace Hardware, Free Advertising, Ron Swanson, The helpful hardware man, Tool Time. Bookmark the permalink.