Posted on November 2, 2016 by theboeskool

I was thinking tonight about how insufferably bitchy a lot of PTA Moms can be… with their annoyingly pushy Type A personalities, and their in-your-face way of saying what’s on their minds, and their incessant “expectations of excellence.” Ugh, right? They’re always working hard enough that it makes you feel a little bit guilty for you NOT working that hard. And they always seem to be in a little bit of a hurry, and a little bit pissed off… Probably mostly because other people aren’t working as hard as them. I know this sort of mom very well… I’m married to one of them.

But I’ve known her type for a long time. I was a kid to whom most things came fairly easy. I never had to try very hard to get by. And somewhere along the way, “not trying very hard” became part of who I am. All I had to do was just sit and listen in class, and–without taking a note, without ever taking a book home–I could manage to pull off a straight B+ average. But every once in a while, there would be something we HAD to study for… And you know who I DIDN’T ask to borrow their notes? Guys. Mostly because the majority of them didn’t take notes either, and the ones who did took notes that looked like a toddler ate a bunch of pencil lead and threw up on a paper. But there were MANY girls who took notes. Girls did their homework. THEY were the ones you wanted in your group when you did a group project… God only knows what kind of a shit show of a project would have gotten turned in if there was a group filled with a bunch of little jack asses like me.

When it came time for needing notes, there were some girls who we knew not to ask. They always seemed to get a little “bitchy” about handing over their hard work to a slacker like me. But I could always find at least one. I’d be charming. Or funny. I’d spread it around, so it didn’t seem like I was taking advantage… You know what? The more I think about it, maybe things DIDN’T come that easily to me. Maybe I wasn’t as naturally smart as I thought I was…  Maybe I’ve just been riding the wave of my privilege so long that it started to feel like natural ability… Maybe I just had some really hard-working females around me who helped me out.

Or a mom who worked as hard as hell to make sure that I had everything I needed… While my Dad didn’t pay his child support, and slowly killed himself with drugs and alcohol. Fuck.

But yeah… My wife is one of those Bitchy PTA Moms. Right now, she is sitting in her office (our converted dining room, whose floor is covered with every manner of God-knows-what that she uses to make sure our kids’ lives are filled with every kind of excellence they wouldn’t receive if I was their only parent), and do you know what she is doing? She is putting hours and hours of work into working on the program for the play that our oldest daughter is going to be in. She is doing this while she has other work piling up from her photography business. Earlier today, she drove some girls on the middle school soccer team to their game after school. This weekend, she spent time making amazingly creative Halloween costumes for our kids–something she does every freaking year. Later this week, she will go to our youngest’s school, and she will spend her time packing food for hungry kids to take home for the backpack program that SHE STARTED… Because kids who are hungry don’t learn very well. Sometimes she has help, and sometimes she doesn’t. But guess what… That shit ALWAYS gets done. 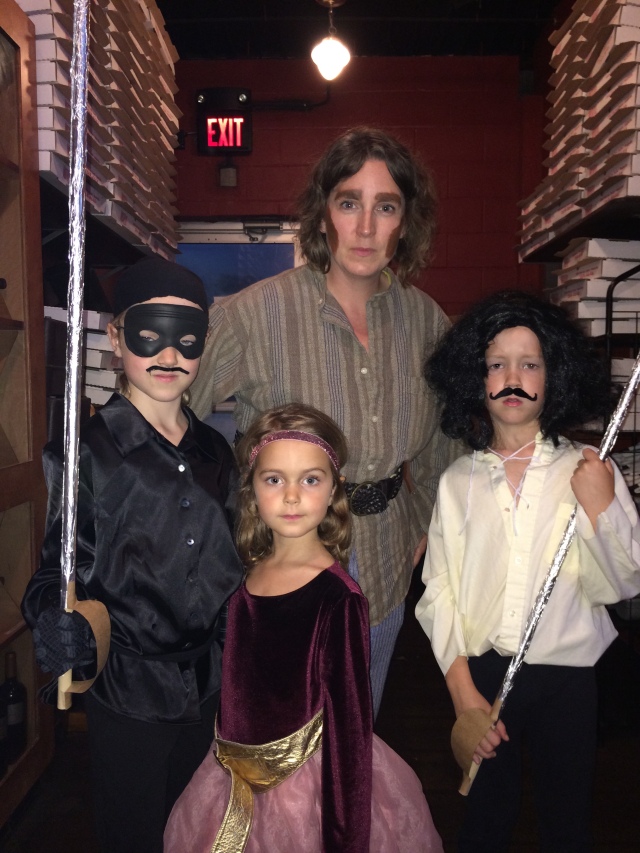 This is the kind of shit she does. Excellence. And she does it all by shopping at thrift stores…

Sometimes she can be a little abrasive. Sometimes there are some fireworks between her and the other Type A PTA Moms who specialize in getting shit done. All the other bitches. Because you know what those bitches do? They get shit done. They put together fundraisers that allow your kids to have nice things that the school system doesn’t pay for because we don’t want our taxes to go up $5 a year. So when someone inevitably complains about something not being right in this year’s program for the play, she might seem a little “bitchy” when she explains how the deadline for having it done was a month before the actual play, and things are bound to change between tonight and the performance. And she might seem a little “bitchy” when she gets in your face after you complain about how all the kids in our county get free lunches, but YOU probably aren’t working on making sure poor kids get the nourishment they need. And I might feel like complaining about buying organic-freaking-apples for the sack lunches we send our kids to school with instead of those garbage meals they feed them at school… But you know what? I think I’ll let it slide.

Serious question… Who run this mother?

I leave you with perfection from Louis C.K. Please watch it. And you should probably also read this masterpiece. We need a Mom in the White House… Not a child.

Post Script: I promise I’m sick of this election too… It’s is genuinely hurting me. It is hurting my hope. It is hurting my faith in humanity. I see despicable actions, and I immediately assume the person doing them is a Trump supporter… Sometimes unfairly, sometimes not. The other day, a guy drew an ejaculating penis on a credit card slip and gave it to a young woman I work with at the restaurant (along with his number)… I hate that I was immediately certain that the sort of person who would do something brazenly offensive like this was the sort of person who would vote for Trump. I hate that if I see white supremacists or confederate flag flyers or people who hate Muslims or immigrants or queers, I automatically know who they are voting for. I see pictures of women wearing “Adorable Deplorable” T shirts, and I feel like giving up. I’m feeling depressed. I’ve maybe got one more blog post in me before the election. This man doesn’t need to just lose… He needs to lose BADLY. Please, PLEASE VOTE. Like Louis said, “If you vote for Hillary you’re a grown up, if you vote for Trump you’re a sucker, and if you don’t vote for anybody you’re an asshole.” I understand that there are reasons to not vote for Hillary… But there are NO good reasons to vote for Trump.

7 Responses to Hillary Clinton and the Bitchy PTA Mom