Posted on September 2, 2017 by theboeskool

A commission of representatives from Tennessee just voted 7 – 5 to NOT have a discussion about taking down the bust of former KKK Grand Wizard, slave trader, and Confederate General Nathan Bedford Forrest. Their vote wasn’t about taking it down or leaving it up… It wasn’t a vote to destroy the bust or have it melted down… It was simply a vote to petition the Historical Society for a WAIVER so they could begin a lengthy process of discussing relocating the bust. That’s it. That’s all this vote was. And SEVEN PEOPLE out of a twelve person commission just voted AGAINST that motion. I think you deserve to know who these people are…

Before I introduce you to them, I’d like to tell you a bit about what’s been happening. Two weeks ago, my wife and I spent half a day at the Capitol Building here in Nashville, Tennessee, and we joined with more than 100 other citizens in demanding that the bust of General Nathan Bedford Forrest be taken down from the halls of the State Capitol. We sang songs, we chanted phrases of protest, we listened to stories, and we sat on the floor outside of where our lawmakers and our Governor were meeting until someone agreed to make a statement about taking down the bust. During our protest, my wife photographed the bust being covered up with a black sheet (even though a white sheet probably would have been more appropriate). Here is the picture she took: 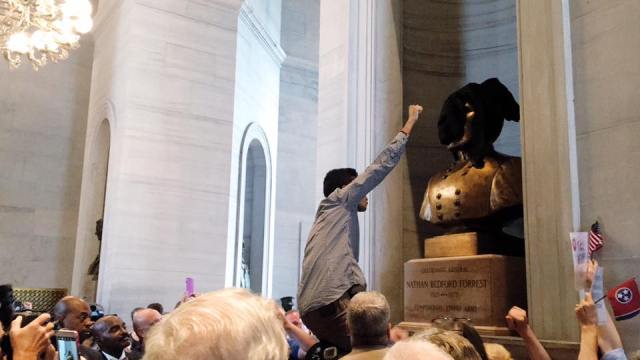 Justin Jones, being his normal kick ass self.

Just in case you don’t know much about Nathan Bedford Forrest, here are some highlights: He made his fortune as a slave trader and planter. He rose to fame as a Confederate general, and came to be known as the “Wizard of the Saddle” and “Devil Forrest.” During the Civil War, he presided over the massacre of hundreds of surrendered negro soldiers at Fort Pillow. Here is the account of the massacre by Achilles Clark, a Confederate soldier with the 20th Tennessee Cavalry:

“The slaughter was awful. Words cannot describe the scene. The poor, deluded, negroes would run up to our men, fall upon their knees, and with uplifted hands scream for mercy, but they were ordered to their feet and then shot down. I, with several others, tried to stop the butchery, and at one time had partially succeeded, but General Forrest ordered them shot down like dogs and the carnage continued. Finally our men became sick of blood and the firing ceased.”

After the South surrendered, he was one of the earliest members of the Ku Klux Klan, which was formed by Confederate veterans in Pulaski, TN in 1866. He was sworn in in 1866 and given the title “Grand Wizard,” which is said to come from his “Wizard of the Saddle” nickname. He now has a State Park named after him, a statue in that State Park, obelisks at his birthplace in Camden, and a bust in the State Capitol. In his book Lies Across America: What American Historic Sites Get Wrong, James W. Loewen writes that Forrest “has THIRTY-TWO state historical markers, far more than any other person in any other state in America. Tennessee supplied three United States presidents — Andrew Jackson, James K. Polk, and Andrew Johnson — but Forrest gets more markers than ALL THREE PUT TOGETHER.” Let that sink in for a moment…

Anyway, my wife and I left the protest at the Capitol feeling hopeful, as Gov. Haslam issued a statement that he believed the bust of Nathan Bedford Forrest DOES NOT deserve a place of honor in the State Capitol. Later, Gov. Haslam pushed the Capitol Commission to act, saying, “I do not believe Nathan Bedford Forrest should be one of the individuals we honor at the Capitol. The General Assembly has established a process for addressing these matters and I strongly encourage the Capitol Commission and the Historical Commission to act.” You might be wondering to yourself, “What’s this ‘Capitol Commission’ about?” and “Historical Commission? Wha?” Well, I had those same questions… Before I spent most of my day on the phone interviewing people close to this story. 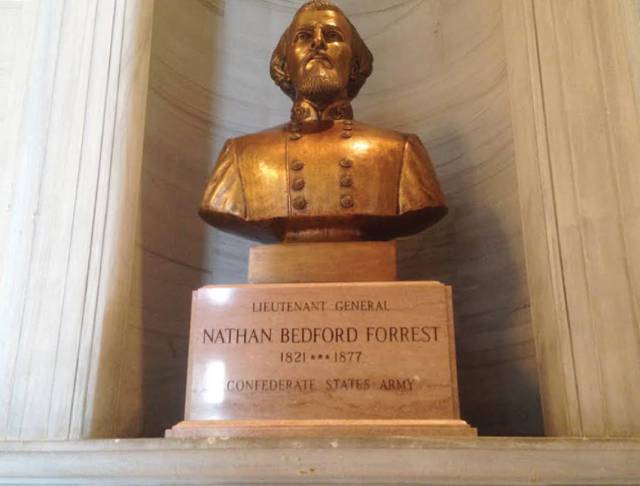 A couple years ago, while feeling pressure to take down monuments honoring the confederacy, the TN General Assembly passed the “Heritage Act,” which put in place a procedure for changing or taking down monuments. It basically adds many hoops to jump through if anyone wants to remove a monument (you know, “Heritage, Not Hate”). The first step is a vote by the Capitol Commission (CC). The CC does not meet regularly, but after Gov. Haslam’s comment (as well as Sen. Lamar Alexander’s comment  that “There is a place for General Forrest’s bust, but not in a place of honor at the state capitol”), CC Chair Larry Martin called the meeting. After a vote, the next step in the process is to allow the Historical Commission to discuss AT LENGTH whether or not the monument should get removed… This discussion process usually would take eight months to a year. But that lengthy discussion will NOT take place, because — AGAIN — the CC voted 7 – 5 NOT to request a waiver from the Historical Commission.

So here are the people on the Capitol Commission, their positions, and how they voted. I’m also including their telephone numbers, just in case you want to call them and tell them what you think of their vote.

First, the five people who voted FOR the simple act of allowing the Historical Commission to weigh the pros and cons of relocating the bust of Nathan Bedford Forrest…

Even after Gov. Haslam and Sen. Alexander urged the Capitol Commission to let the Historical Commission start a discussion about relocating the bust, THESE NEXT SEVEN PEOPLE VOTED AGAINST ALLOWING THE HISTORICAL COMMISSION TO HAVE THAT CONVERSATION:

Listen–This is government at its worst. This is called “PUNTING.” It’s when political leadership, rather than doing the job they were asked to do, decides to let someone else worry about it. In this case, the members of the Capitol Commission punted to a General Assembly that often is full of people representing districts that have no interest in taking down statues dedicated to former Grand Wizards of the KKK. And they won’t even be able to entertain the idea of taking down the bust until at least January of 2018… Long after today’s political capital is spent on some other national embarrassment. 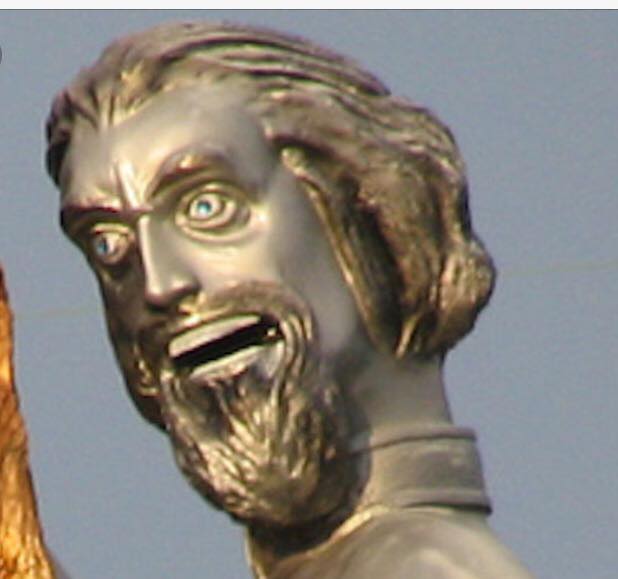 Here is the face of ANOTHER NBF statue that stands in Nashville… Caption from a really funny friend: “That feeling when the president thinks you’re beautiful.”

Before I finish (and you share this post, and then pick up your phone and start calling people), I want to leave you with some thoughts from Howard Gentry, who (along with Dr. Mitchell) is one of only two People of Color on the Committee. I spoke with him on the phone. Which, first of all… You know how you know you voted the right way? You don’t mind answering questions from the press about your vote.  He said “the Capitol Commission deflected their responsibility today.” He said, “I consider the State Capitol the sort of place where people of all types can enter the building expecting non-bias and fairness to be reflected.” He went on to say, “No one suggested that it be destroyed… Just removed. We’re at a time right now where these statues are affecting people’s right to safety and happiness. I’m just disappointed that we didn’t look at it through the eyes of the people who are most affected by these statues.” Gentry, now 65, remembered growing up in this area, and visiting the State Capitol as a boy at a time when that building still had separate bathrooms for “Colored People.” He said that “to walk into the Capitol right now and see the bust of someone who supported slavery and the degradation of people of color, it brings back those memories.”

Right now — In 2017 — in our State Capitol, we have a bust honoring a man who got rich off of slavery… Who massacred surrendered black soldiers to send a message to other black soldiers thinking about fighting for their freedom… Who helped found the KKK — one of the worst terrorist organizations this country has ever seen. And in our state, we have representatives who know this, and don’t care enough about that fact to start the process of taking it down. Please — PLEASE continue to put pressure on the representatives here in Tennessee, so that no more kids will walk into our Capitol and feel separate… Like the values of fairness and equality that SHOULD be represented in that building don’t apply to them. TAKE IT DOWN.

I’d like to say a special thank you to Ann McGuaren, Lola Potter, Pat Bailey, and Katie Hicks… Kind people who not only answered my questions, but pointed me in the right direction to find out how people voted and helped me understand how the process worked so I could explain it to you. They called me back when a lot of people didn’t.

A lot of work goes into writing this blog. If you value my voice and you want to help support it, you can BECOME A PATRON. It’s easy and fun… For the price of a cup of coffee each month, you can help me buy my wife a cup of coffee each month. Otherwise, if you want to LEAVE A TIP ON PAYPAL, you can do that too. You can also follow me on Facebook as well as on Twitter. Which is also fun, because sometimes I am funny. Or, just share this post with the people in your lives. And maybe flood the phone lines of these people who chickened out. They need to know that was gross. Either way, I love you.