Posted on September 6, 2017 by theboeskool

With Trump’s announcement that he will end the Deferred Action for Childhood Arrivals (DACA), people have been trying to figure out “WHY?” Why now? Why ever?! Why would he go back on his word like this? How could a human being do something like this? Etcetera… There are a lot of theories out there:

maybe Donald Trump will build levees instead of the wall if we tell him that water is Mexican.

Donald Trump is saying in every way possible that power in America is white, straight and male and all else are targets. #DACA

Trump has shown more empathy for white supremacists in Charlottesville than DACA recipients.

Trump has done it again. Nobody is talking about Russia. 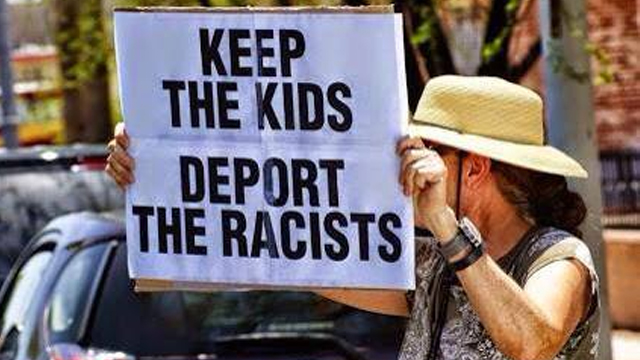 Can we all just get T-Shirts that say this on them?

'I'm no racist, how dare you! I just happen to support Donald Trump, a racist who pursues racist policies with the support of all racists.'

Thank you. I was starting to forget what a president is supposed to sound like. https://t.co/zv7zSpJIKA

There may well be SOME truth to all of these things… But it’s not the WHOLE truth. The real reason Donald Trump is trying to get rid of DACA is as follows: IT IS BECAUSE HE IS A FESTERING BAG OF SHIT. Period. Every unscripted opportunity he has had to change my mind on this has only resulted in him proving he is the absolute worst. He is a rotten, broken excuse for a human being… A hollow shell of a man whose narcissism leaves no room for anything as unprofitable as “compassion.” Morality and conscience fled from the putrid smell a long time ago. He is a bloated orange pile of selfishness, white supremacy, and self-loathing that feeds on misplaced praise. That’s it. There’s no need to look for a deeper meaning for the things he is doing… No reasoning… No strategy… It’s just this: The President is a bag of shit.

And I am aware this is not a “Christian” way to speak about someone. I get that… I guess I’m not feeling very “Christian” right now. And I get it! “Dehumanizing” people is what THEY do… We can’t “stoop to their level.” “When they go low, we go high,” right? Well… I just can’t right now. If we are so afraid of “dehumanizing” people that we refrain from calling an actual monster a “MONSTER,” then what is that word for? There are actual monsters in the world… And we have elected one of them as the President of our country.

I am done playing nice. I am done worrying about how “Christian” it looks when I call him what he is. I realize we are supposed to “Love our enemies,” but Trump does not need love… He needs to be removed from a position where he can hurt even more people. I seriously believe he is beyond help. Giving him “love,” would be like giving shoes to a man with no legs. His brokenness is even beyond the reach of his own family. His own children are nothing more to him than medals he pins on his empty chest. If a maniac is walking around wildly swinging a sword and hurting the people in his path, “Loving” that person does not look like praying for him and letting him continue. It also doesn’t look like picking up your own sword and cutting him down. But Loving him CAN look like a community of people wrestling him to the ground… taking the sword away from him so he stops inflicting harm… and then keeping him away from weapons until he comes to his senses. If he ever does…

This is my truth right now. Thank you for reading it. A special thanks to Lori, who is my newest Patron. THANK YOU! It means so much. If everyone who values this blog became a $2/month Patron, writing could be something like my JOB… And that would be amazing. So if you’d like to support my writing, you TOO can BECOME A PATRON. Or, you can LEAVE A TIP ON PayPal, which sometimes happens. Otherwise, follow me on Ye Olde Facebook, and also on Twitter. And most of all, keep on resisting and opposing this present darkness.

This entry was posted in 1) Jesus, 2) Politics, 3) Bathroom Humor and tagged Bargaining Chip, Border Wall, DACA, Dreamers, Jeff Sessions, Keep the kids Deport the racists, The reason Trump is ending DACA, Trump is a bag of shit, Tweets about DACA. Bookmark the permalink.

6 Responses to The Real Reason Trump Is Ending DACA