The Republican Party Is Morally Bankrupt. And If You Vote For Them, You Are Too.

It’s just the truth. I know people “don’t want to make this about a political party.” I know people want to be all “Not All Republicans.” I know that people want to say that “Saying stuff like this is how Trump won.” But it’s the truth… And if there is ever a time to speak the truth, it’s RIGHT NOW: The Republican Party is morally bankrupt… And if you vote for them, you are too.

And please know, it didn’t have to get all the way to “Taking away the children of people seeking asylum, and putting those kids in baby jails in an attempt to pressure democrats to vote for funding a wall” in order for me to make a statement like this… It has BEEN the truth. It’s not the truth just because the stuff that is currently happening is particularly awful… If there is one thing this GOP administration can be trusted on, it’s that they will soon do something even worse — Something so awful it will make “Forcibly separating kids from their parents and keeping babies in cages” seem like a time when things WEREN’T so crazy. It’s the truth because “morality” means something. And what we have seen these long last 18 months of this GOP Administration AIN’T IT.

It's terrifying how quickly I went from "Mexico will pay for the Wall" to "If American taxpayers don't pay for the Wall I'll literally put children in concentration camps!" https://t.co/ArUXIuXvOv

If you’re like me, it probably seems like everyone hates Trump as much as you do… But that is not the case. There are many, MANY people who were cheering when he started his campaign by calling Mexicans “rapists and murderers,” they were cheering as he chanted “Build That Wall!” at his rallies, they were cheering when he talked about “many fine people on both sides” after a racist murdered a protestor at a white supremacist rally, and they’ve been cheering as he continually fans the flames of xenophobia and bigotry. There are MILLIONS of people in this country for whom these sorts of atrocities and human rights abuses are EXACTLY why they wanted a “President Donald Trump.” And sure, some out there might genuinely not know any better because they probably only watch the network that portrays these detention centers as “summer camps.” But for some of you out there, you are starting to question whether “an anti-abortion Supreme Court Justice” or “tax cuts for the wealthy” was worth the price of what supporting an objective monster like Trump is doing to your soul.

And here’s something important to consider: How shitty is it that it took tearing families apart and building tent cities with 20 kids per cage and literally imprisoning people for a MISDEMEANOR for you to finally say, “I think that’s a bit too far?”

I hear people getting upset about Robert DiNero saying “Fuck Trump” because they feel like that is just going to upset people and push them further away. But honestly, I don’t know how someone can look at the news and NOT feel a giant “FUCK TRUMP” well up inside of them. PLEASE read this whole thread of the tweet below…

And if you are one of the people insisting that calling Racism and Bigotry and Hatred and Injustice and Immorality by their NAMES is “how Trump is going to win a second term,” I’ve got some news for you: If someone is so blind to the clear immorality of this president that they are swayed to vote for a racist, lying, dictator-praising, free press-attacking, sexual-assaulting, pussy-grabbing, pile of narcissistic immorality like Donald Trump (or any of the rest of the spineless legislators afraid to lose their seats for calling evil “evil”) just because people like me weren’t “gentle” enough with them when we pointed out how utterly repulsive it is to support these republicans, then THEY WERE NEVER GOING TO DO THE RIGHT THING IN THE FIRST PLACE. Imagine being so fragile and vindictive that you would vote for a monster like Trump just because someone used the F-word or pointed out your racism… 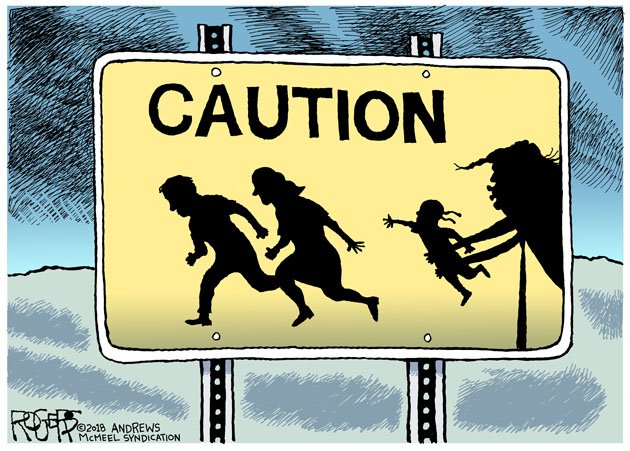 This is one of the cartoons that got Rob Rogers fired from the Pittsburgh Post-Gazette after working there for 25 years… for being too critical of Trump.

Because he IS a monster. He is a horrible monster. If a person could end this “zero tolerance policy” at the border with a phone call, and that person chooses NOT to, that person is a monster. And just about every legislator with an “R” behind their name is supporting that monster… Other than a few folks who feel “emboldened” enough by their planned retirement from politics to actually be critical of a man who criticizes Justin Trudeau while praising a brutal, murderous dictator like Kim Jong Un.

Last night, Rachel Maddow broke down in tears while trying to read about toddlers being detained/imprisoned in something called “Tender Age Facilities.” Here is the video:

The reaction you just saw is an appropriate reaction for a human being to have when they hear the term “Tender Age Facilities.”

And people are rightly focusing on the inhumanity of what this does to the kids… but it is also horrific for the adults who were seeking asylum. Once, when my oldest daughter was just a little kid, I spent roughly one full minute thinking someone had taken her. I had just read The Shack, so my imagination was on full Worst Case Scenario mode. We were at a playground/park with a bunch of people at it, and I thought my daughter was with my wife. When I walked over to my wife, she asked me where our daughter was. I immediately ran around the playground twice, yelling her name the whole time. There were maybe 60 seconds where I didn’t know where she was or who had her. It turns out she was hiding in one of the tube slides… But I can tell you that that terrified feeling of being separated from someone I love and not knowing if I’ll get them back is as close to an actual hell as my brain can imagine.

You might be thinking that you don’t want to share things like this post because it’s “too divisive” or because “you don’t like getting political.” Well, “not getting political” is a luxury people have who don’t have to worry about THEIR kids being forcibly taken from them and put into “tender age facilities.” You might feel a deep sense of “What’s the point? Everything sucks.” I feel that way sometimes too… But we must not lose hope. We must stay vigilant and committed to the truth. We must call immorality and hatred and cruelty buy their names. We must speak up for people whose voices are silenced. And please hear me: WE. MUST. VOTE. We must overwhelm the polls with people committed to getting rid of the immoral people who support the broken, immoral man who currently leads our nation.

Oh, I feel it too. I want to give up. It’s hard to keep caring when there is a tidal wave of despair every day. All I can say is THANK YOU SO MUCH to the people who support me on Patreon. It is such an honor and encouragement to have people who care enough about this blog to help pay for it. If you want to BECOME A PATRON… If you want to LEAVE A TIP ON PAYPAL… or if you want to follow me on FACEBOOK or on TWITTER, that would be just fantastic. Thank you for reading, and thank you for sharing.

4 Responses to The Republican Party Is Morally Bankrupt. And If You Vote For Them, You Are Too.