Our Political Climate Makes More Sense When You Remember That Most of These People Are Still Alive… And Voting.

In 1955, after allegedly whistling at a white woman, 14 year old Emmett Till was lynched. He was dragged from his relative’s home in Money, Mississippi in the middle of the night by two armed white men, beaten and tortured, shot in the head, and then his lifeless body was thrown into the Tallahatchie River, barbed wire wrapped around his neck and tied to a fan from a cotton gin. Emmett’s mother later insisted that his funeral be an open casket, so that the world could see what they had done to her baby. A few months later, an all-white, all-male jury declined to indict the two murderers, despite their own admission that they kidnapped the boy. A year later, with no fear of being tried again for the same crime, the killers sold their story to Look magazine for around $4,000, and admitted to murdering Emmett Till… Without any remorse. Both the men died of cancer before they could be brought to justice. Emmett Till would have been 77 years old this July.

Most educated people have heard of the story of Emmett Till’s murder. But many people look at this tragedy as a kind of racist historical footnote… Something tragic that happened when all the pictures were black & white, but something from which we’ve all moved on. But lynchings still happen in America… sometimes committed by people in uniforms. And those people can be caught on VIDEO shooting black folks in the back as they run away, and juries STILL “decline to indict.” Racism is alive and well in America.

And just like the sinking, disoriented feeling we had watching the results come in during the 2016 election, we are left feeling bewildered. Baffled. Dazed. We WANT to believe we’ve moved past this. We desperately WANT to believe that we are “better than this” as a country. Here in Tennessee, just one county over from Nashville, an election for Wilson County Commissioner recently ended in a tie. A republican candidate named Robert Fields blamed the tie on the fact that his opponent “kept quiet that he is a Democrat, an interracial couple, [and has] two interracial children.” As if being in an interracial relationship or having biracial kids is something a person should be ashamed of. But Fields is aware that — STILL TODAY — people finding out about “racial commingling” can cost someone an election. Especially in this part of the country.  Robert Fields was born in the South in 1948… Making him just seven years younger than Emmett Till would be if he were still alive today.

If you’re wondering HOW IN THE WORLD so many people can still support someone like Trump — an objectively racist and bigoted man — at this point in our nation’s history, this post might make it easier to understand. Our political climate today makes much more sense when you realize that the black & white pictures of our “racist past” are FAR from ancient history. Many of the people in these photos are still alive… And Voting.

Many of the college-aged men intimidating and harassing the protestors during the Nashville Sit-Ins in 1960 are still alive… And voting.

Look at the expression on the woman’s face…

Many of these confederate flag-waving kids in these photos, angry about People of Color being allowed to go to “their” schools, are still around… And voting. 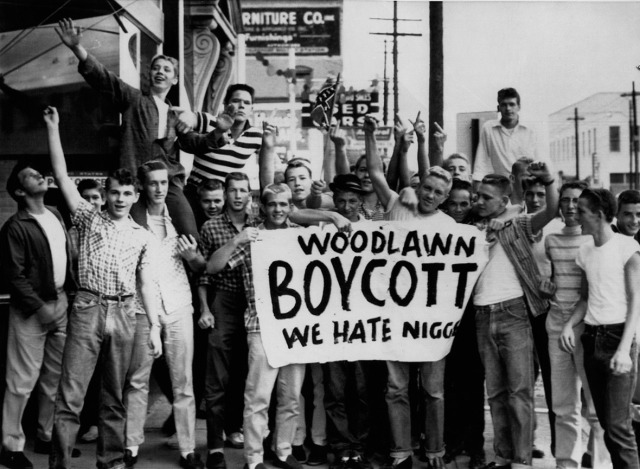 “Hey Billy, get on my shoulders.”

These dip shits are probably in their late 70’s… And voting. 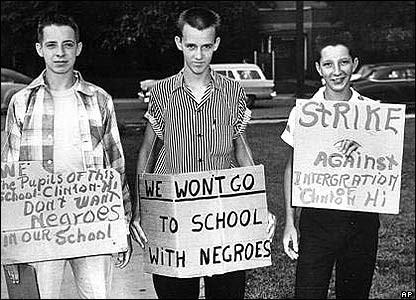 Even back then, Clinton was part of the problem.

Hazel Massery, the young woman in this iconic photograph spewing venom at Elizabeth Eckford (one of the “Little Rock Nine”) is still alive… 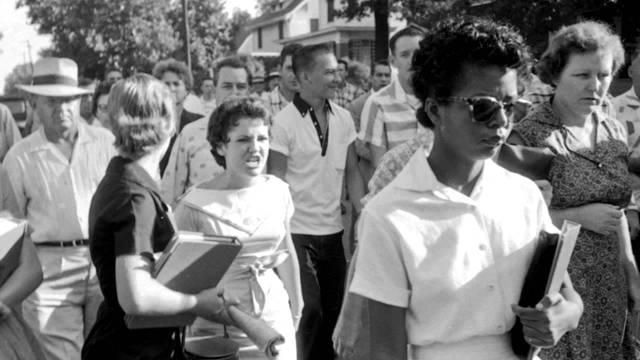 I believe the man in the hat is Hannibal Lecter from the end of Silence of the Lambs. And the woman carrying the folder just figured that out…

And women live even longer than men… 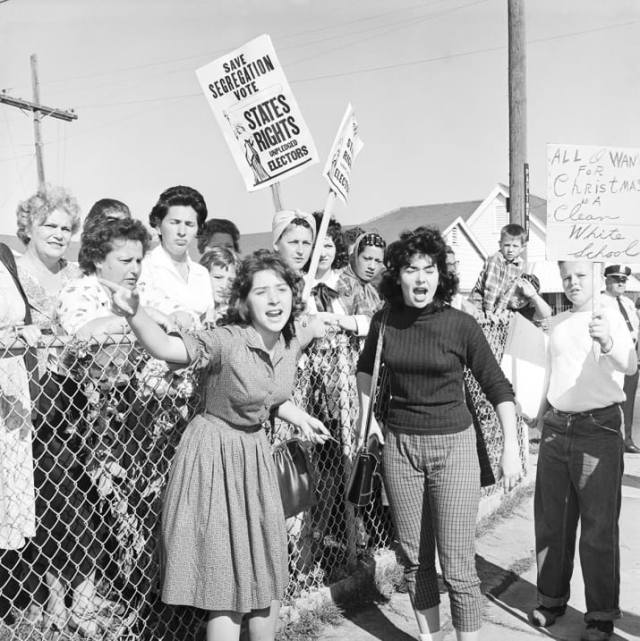 “States Rights” has always been code for racism. Also, “All I want for Christmas is a clean, white school”? Is that what you decided on?

This kid with a belt wrapped around his fist was probably taught to do that by his father. And many of these kids are still alive and kicking… And voting.

“MY PANTS ARE FALLING DOWN AND IT MAKES ME ANGRY!”

Why do I feel like those dudes are going to start singing “Man of Constant Sorrow”? Also, there is something super creepy about that dude holding the flag…

These people are not only still alive and voting… They are business leaders. They are district attorneys. They are police chiefs. They are elected officials. They are running for office in a town near you.

And please don’t get me wrong… I know that not ALL of the people in these snapshots from our racist past are still as virulently, overtly racist as they were when these photos were taken. But MANY of them are. And you know what? They are voting republican. I realize being a republican does not make someone a flaming racist… But if you’re a flaming racist, you sure the hell are voting republican. Take as an example the two men at the Trump rally with the “I’d Rather Be A Russian Than A Democrat” T-shirts on. What most people DON’T notice or realize is that right behind them there is a man with an “88” tattoo on his wrist (just behind the man in the MAGA hat). This is a well-known symbol for nazis and white supremacists… all allusion to both the “88 Precepts” (a white supremacist manifesto on how to organize a white nationalist nation) as well as code for “Heil Hitler” (with “H” being the 8th letter in the alphabet”). These are the sorts of people going to these rallies… And we should be talking about why that is.

Behind the incredibly stupid MAGA'ers at this Trump rally, there's a person with an 8️⃣8️⃣ tattoo, a Hitler reference white supremacists have embraced. pic.twitter.com/7R0dr8pMJy

Anyway, back to Emmett Till. In an attempt to preserve and remember the past so we can learn from it, groups like the Emmett Till Interpretive Center work to educate the public about America’s past and current racism. One of the things they do is to put up historical markers, telling the story of Emmett Till’s life and lynching, and of the Jim Crow South. One of the markers they put up was at the site where his body was found. They have had to replace it three times. The first marker was torn down. The second marker was filled with so many bullet holes the sign was illegible. And now, just 35 days after a new sign was put up, that new sign has once again been riddled with bullet holes.

The original marker where Emmett Till’s body was found in Mississippi was stolen in 2008. The second was destroyed by gunfire in 2016. Now, just five weeks after a third marker was put up, it took has been shot. https://t.co/zlNz4c6t3x

This. Is. America. This is who we are. It’s not ALL of us, but it is definitely SOME of us. We all want to believe that this stuff is in our past. I want to believe it, too. Yes, it’s part of America’s past, but it is ALSO a very real part of America’s present. The hatred that fueled the murder of Emmett Till is alive and well and thriving today… And that hatred is VOTING.

So here are two things that you can do. 1) YOU CAN VOTE. Register to vote. Register other people to vote. Vote in primaries. Educate yourself on the candidates. Vote, vote, VOTE! People literally gave their lives for us to have the right to vote, and electing good leaders — especially women and minorities and People Of Color — is an important part of building a nation that actually values Equality and Justice. And 2) You can make a donation to the Emmett Till Interpretive Center. They are raising money to buy land near the marker, install cameras, set up a new marker, and create an app that helps people tour the locations of the tragic events that ended Emmett Till’s young life… Events which are widely regarded as the spark which lit the fuse of the Civil Rights Movement. You can donate RIGHT HERE. I did. They have raised over $36,000 so far, but they need much more. And something tells me they will be needing extra money to replace things that are shot up the next time.

So there you go… Vote and Give. Two things you can do. And show up. THREE things. Vote and give and show up. I was able to give to the Emmett Till Interpretive Center partly because other folks generously decided to support this blog. If my writing matters to you, and you’d like to support it, BECOME A PATRON. Or you can LEAVE A TIP ON PAYPAL. You can also follow me on Facebook or on Twitter. Or share this post. Vote and give and show up and share this post. FOUR things.

1 Response to Our Political Climate Makes More Sense When You Remember That Most of These People Are Still Alive… And Voting.