Please. I’m Begging You. You Beautiful Idiots… TAKE. THIS. SERIOUSLY.

“If you had to choose, would you rather be smart & sad, or dumb & happy?” That was the question the makers of Cards Against Humanity asked people in 2017 after they asked people to send them $15, and in return they would get 6 days of surprises. They called it “Cards Against Humanity Saves America.” For day 5’s surprise, they took a portion of the money they had collected to pay for a survey (one they had started three months earlier). They asked some AMAZINGLY INTERESTING QUESTIONS, and all of their answers were shown in a way that you could see how democrats, independents, & republicans answered differently. You should definitely check out the entire survey… But one of the most divisive questions on the survey was the one above: The one about choosing between being smart & sad, or dumb & happy.

I have been thinking a lot about that question as I watch people’s responses to this global pandemic we are living through. About two weeks ago, a friend asked me what I thought about everyone freaking out about COVID-19. He thought it was “no big deal.” He thought the media was whipping everyone into a frenzy. “Just like the flu,” he said. I told him that two months from now this was going to make 9/11 look small in comparison.

I don’t blame him for discounting the seriousness of this virus and dismissing the media’s account of what was coming — We have a president who regularly calls the Press “the enemy of the people.” Trump — along with all of the conservative media outlets — dismissed the criticism of his inept & borderline criminally negligent response as a “new hoax.” When experts were already telling him that — because of his inaction (and his desire to keep the reported number of cases low and keep the markets high) — containment was no longer an option, he was still telling the country that the number of cases would likely soon go from 15 case to “close to zero,” and that it would disappear “like a miracle.” He played down the seriousness of this outbreak OVER AND OVER (here’s a complete list), and then, when he was finally forced to take this seriously, he actually had the audacity to claim, “I felt it was a pandemic long before it was called a pandemic.” So it makes complete sense why so many people would downplay the seriousness of this virus: We have a moron in charge who was actively encouraging people to downplay its seriousness.

In the book The Great Influenza: “The final lesson of 1918…those in authority must retain the public’s trust. The way to do that is to distort nothing, to put the best face on nothing, to try to manipulate no one.”

This will probably sound arrogant, but I am too well-informed to not take this seriously. So now we are in a position where EVERYONE must limit all social interactions in order to prevent the continued spread of this disease (COVID-19) and the virus which causes it (SARS-CoV-2)… Just like HIV and AIDS are not the same thing, but HIV is the VIRUS that causes AIDS. SARS-CoV-2 (which stands for “severe acute respiratory syndrome coronavirus 2”) is a “novel” virus, which means that it is brand new, and that no one on the planet has immunity to it yet. It’s still unclear, but with proper care, the Case Fatality Rate (CFR) has been estimated at anywhere between 1% and a little more than 3%. So basically, for every 50 people who get infected, around one person is going to die. Those chances get way higher the more risk factors you have. Some people seem to be “comforted” by those numbers, but we need to remember that NO ONE has immunity. There are 7.5 billion people in the world… If left to itself, that CFR would kill roughly 150 million people. Even with the steps we are taking, COVID-19 could easily end up killing 10 times more Americans THIS YEAR than died from cancer or heart disease.

That means that if drastic action is not taken, it will kill millions and millions of people. And for SOME GODFORSAKEN REASON, I still am seeing moms on Facebook who are like, “What are your thoughts on playdates for the kids right now?” ARE YOU #$%&ING KIDDING ME?!? Even though this virus has crashed the markets and brought the world economy to its knees, there are somehow still people out there who feel this this is all an “overreaction.” And it’s driving me insane… PEOPLE. THIS IS THE PARKING GARAGE AT VANDERBILT UNIVERSITY MEDICAL CENTER: 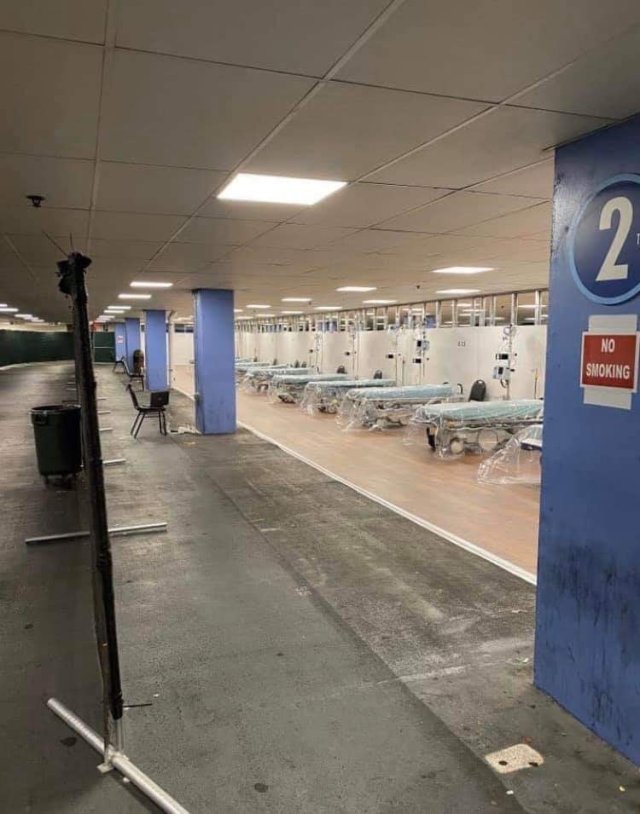 We can’t even smoke in a GARAGE anymore??? Thanks, Obama…

Do you know WHY they are putting hospital beds in their parking lots? Because this virus is not a matter of opinion… It’s a matter of MATH. They KNOW that they are going to run out of space. When China saw how serious this was, they started building hospitals. Trump was told in JANUARY how serious this was, and instead of ordering hospitals to be built or ventilators to be made, he started telling people it was “under control” and no big deal.

One of the messages that has gotten out is, “If I just wash my hands and don’t touch my face, I’ll be fine.” THAT IS NOT THE CASE. This virus is aerosolized, which means that it is spread through the air. You don’t have to touch the virus in droplets and then rub your nose or eyes to get it… It’s in the air. Someone doesn’t have to sneeze onto your face for you to get sick… They can merely be talking a few feet away from you. Was that person you just walked by at Kroger BREATHING? Because if they were, and if they were infected, you might have just walked through and breathed in some fresh SARS-CoV-2 spores that will end up with you needing a ventilator two weeks from now. THIS. IS. SERIOUS. And Trump keeps outright lying about the steps they are taking…

Maddow: If Trump is going to keep lying like he has been every day on stuff this important, we should, all of us, stop broadcasting it. Honestly, it's going to cost lives. pic.twitter.com/tMvyrE3YTK

Because of this republican administration’s refusal of the testing kits the World Health Organization provided (because they wanted to make money developing their own tests using American businesses — tests which ended up failing, which you can read about here), we are dangerously and negligently low on tests. Right now, you basically have to have severe symptoms in order to get tested. And this virus can be contagious for TWO WEEKS before showing any symptoms… This basically means that the numbers we are seeing are DRASTICALLY lower than the actual numbers of infected & contagious people out there. How much lower, you ask? Unfortunately no one knows. Because we don’t have enough tests to test people other than the ones who obviously already have it. Basically it is like testing for AIDS and paying no attention whatsoever to how many people have HIV. And let me make this perfectly clear just in case you don’t already know: That is NOT how you slow, contain, or stop an epidemic.

I cannot believe this asshole is the president of the United States. #PressBriefing #coronavirus pic.twitter.com/yfI0zqZaR3

Italy went through some political turmoil when they were testing for the virus. The Lombardy region started testing everyone, and politicians were angry because they thought it was inflating their numbers and making their country look unsafe (and that would affect tourism/$$$). Other places limited their testing to people who had some symptoms (fever and cough). Even though Lombardy fared way better, Italy is now a giant mess… There are simply not enough ventilators for the thousands of people who need them, and people who need a ventilator and don’t get one DIE. Italy has now surpassed China’s death toll. They are having to decide which people get to live and which ones are going to die. 627 infected people died YESTERDAY ALONE in Italy… and if that doesn’t make you take this seriously, know this — Our number of cases have mirrored Italy’s timeline of cases, but there is a significant difference: Italy has tested WAY more people than the United States. By this point, because of the incompetence of this nation’s leadership, there could very easily already be MILLIONS infected and not showing symptoms. We don’t know where the “hot spots” are. We are flying blind.

And because of this, EVERYONE NEEDS TO STAY HOME. That means YOU. This is not a situation where you get to choose to be “dumb & happy.” I don’t care if you are living in a state with a dip shit for a governor (like I am) who hasn’t ordered people to stay in their homes… STAY HOME! Don’t go out unless it is absolutely necessary. For a while at least (and longer if we don’t have universal access to testing), we need to be acting like every single person is infected. If you are a parent who is considering whether to allow your kids to hang out at a friend’s house, STOP IT! Put on a movie… Let them talk on FaceTime… But DO NOT let your kids go on freaking “play dates” right now. If you think people are overreacting by not going out to eat, YOU. ARE. WRONG. This is not a matter of opinion. This is a matter of science. This is a matter of math. And this is a matter of life and death. START ACTING LIKE IT.

Thank you for reading! Please share this with the people in your life and help them understand how serious this is. You might know that I already lost my job because of this virus. I am a server by profession. How I make (made) money is I bring people tasty meals and take care of them, and, in turn, they leave me a tip. It took me WAY longer to write and research this post than it does to bring you some food… If you feel like this post was a tasty meal, and you feel like I’m doing a good job taking care of you, please consider leaving a tip. You can do that ON PAYPAL or by Venmo-ing me at “chris-boeskool.” You can also BECOME A PATRON (like Clara did… THANK YOU!), which is like leaving a tip every month. If you are not in a position where you are able to do that right now (like many of us are), I totally understand. I will keep writing… and you can follow me on Twitter and on Facebook for more fun. Love your neighbor and STAY HOME!!!

2 Responses to Please. I’m Begging You. You Beautiful Idiots… TAKE. THIS. SERIOUSLY.