My Almost First Time With A Middle-Aged Lady 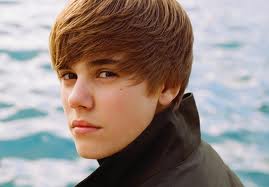 The first time I heard of Bieber Fever, I figured it was something that could be cleared up with some sort of cream....

I wasn’t always this bald. There was a time in high school (it seems like just yesterday, but really it was almost 20 years ago) when my blonde locks flipped into my eyes like some sort of skinnier, Dutcher Justin Bieber. And there is a deep part of me that still remembers all that hair–sometimes I still feel a phantom tickle on my forehead and flip my head to the side to swing hair away that is no longer there. But ahhh…. High school. Playing “Curly” in our school performance of Oklahoma! with hair actually coming out the sides AND FRONT of my cowboy hat…. Being out on stage performing in a singing group (looking like a dorky, gangly seal–before I realized you could bend your arms as you clapped) with my smooth tenor voice emanating from that sweet spot right between a sweater vest and a full head of hair…. And having my sexy, cowlicked coiffure bounce up and down as I ran on our State Championship winning basketball court….

I didn’t make it out on the floor very much during the actual games–not unless the outcome was already decided. Don’t get me wrong–I had skills. I was actually really good, as long as nothing was on the line. During real games, everything just seemed to matter too much and I couldn’t handle the pressure. But boy, oh boy, did I ever make that bench look good. At least all of the photographers for the local papers seemed to think so. I barely ever made it out onto the floor, but, for some reason, I sure made it into the photos that went along with the stories of our championship run. Maybe it was how much easier it was taking pictures of a non-moving target, maybe it was just the comparative homeliness of the rest of my bench mates…. Who knows. I didn’t mind. Until one day….

It was the female equivalent of this.

A letter came in the mail for me. It was addressed to the school. Well, “addressed to the school” might be giving it a little more credit than it deserves. What was written was something more like “Christian High School, Chris Boeskool, Michigan” in what looked like a third-grader’s handwriting, and some genius mailman deciphered those hieroglyphs and delivered it to my school (he probably recognized my name from all those pictures in the paper). I opened the letter and the first thing I noticed was a picture. I remember thinking, “This has GOT to be a joke.” In my virginal hands, I held a full-length picture of an out of shape, middle-aged woman wearing some sort of leopard-print bikini. I looked around the English classroom to see who was smiling or laughing–some clue to let me know which one of my classmates was behind this wonderfully heinous joke–but no one was smiling. I unfolded the letter and my eyes scanned the page through phrases like “I see your picture in the paper” and “I love you” and “dress sexy for you” until my gaze rested on the one portion of the letter in which things got serious: “I’ll let you have sex with me if you want.” 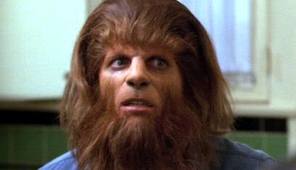 "Workers of the world, Unite! The werewolf is the natural enemy of the wolverine."

Holy shit… (Yeah, I know–Kids at Christian Schools were not supposed to say things like this, but there were some exceptions to this rule in extreme cases. Among the situations that made profanity acceptable: If communist werewolves parachuted down from the skies to take over your town like some sort of fever dream you had after watching Teen Wolf and Red Dawn under the influence of NyQuil; if Michael Jordan walked into your classroom to give you a pair of autographed shoes; or if a creepy 45 year old woman sent you a picture of herself in a leopard-print bikini and offered to have sex with you. It was in the handbook. It was somewhere in the back, but it was in there).

Within moments, there was a suffocating frenzy of laughter and late adolescence bustling around me and the treasure that was this parcel of mail. We examined it for clues as to its authenticity, and it seemed legit. We looked for clues in the photo and saw that one half of her body seemed…. droopier than the other–we wondered if the reason the penmanship and grammar seemed distressed was because she may have had a stroke. Even though many of us had no doubts that the letter/picture were genuine, a few of my doubting friends soon left (I don’t remember the exact timeline) on a trip to check out my admirer’s address. When we talked the next day, they told a harrowing tale of hillbilly brothers in a suped-up station wagon and a high-speed chase down roads that went from paved to gravel and almost ended up with everyone dying. To hear them tell it, they had barely escaped with their lives.

But I had to see for myself.

It looked like this, it was faster than crap, and it did NOT have automatic locks...

That afternoon, I found myself in the backseat of my friend’s Malibu on a rural road in Michigan staring at a small house. We were stopped on the road, right next to the stone path that led from the front door to the mailbox. My eyes surveyed the horizon for any sign of a station wagon kicking up dust. All of the sudden, the silence was broken by an idiot in the front seat yelling, at the top of his lungs, “HEY SHIRLEY!!! IT’S CHRIS!!!!!” (I can’t, for the life of me, remember her actual name, but let’s just say her name was Shirley. It was definitely a name in a Shirley-ish sort of category) There was a moment of silence as the words seemed to hang in the air…. We all shrieked and clung to each other as a woman kicked open the screen door and limped toward the Malibu with handfuls of pictures in her hands that fell by the path as she advanced (It wasn’t in the “Holy Shit” section of the handbook, but pretty sure we would have been given a pass on this one). “Chris!!! I’ve got some more pictures for you!!!” I think she was shooting for sultry, but, to our ears,  she landed on threatening. She seemed to be walking with purpose…. That purpose? To make sweet, statutory love to the blonde-haired kid in the backseat of that Malibu.

I’m not sure how I did it, but I simultaneously locked all four door locks at the same time–the two in the back with my hands, and the two in the front with my feet–I looked like a cat trying to not fall into a toilet. I screamed the word GO in a way that would have compelled any driver’s foot to press the gas pedal to the floor, and within moments, she was a dot in the rear view mirror. But I’m pretty sure that my heart didn’t stop pounding until long after I fell asleep that night. As I dozed off, I thought to myself, “Sometimes, being this good-looking can be a curse” (within a year, my hair would start to leave me like a Chevy Malibu driving away from a love-struck hillbilly). Later that week another letter arrived, but this one was intercepted by our principal. The authorities were notified, we never heard from her again, and everyone lived happily ever after.

There’s a moral to this story, I’m just not sure what it is.