Seeing all that sauerkraut made me hungry for some kielbasa.... Or maybe a nice knockwurst. RIP Todd.

For some reason, people who work in restaurants always seem to be ravenously hungry. Every once in a while, after an off-site catering event, the people who worked the event will bring back these big pans of uneaten food and there is a small feeding frenzy. You learn quickly that unless you grab the stuff that you want RIGHT AWAY and put it in a ToGo box engraved with your name, it will be gone and you will left picking through fatty roast beef scraps (not that that is the worst thing that could happen). One time, after just such an event, a bounty–a Cornucopia–A HORN OF PLENTY, if you will–came back to the restaurant, and my eyes beheld a mouthwatering sight: Sauerkraut. Ahh, sauerkraut–Native food of my ancestor’s neighbors…. I’ve loved you since I was a child. It seemed a little out of place from the rest of the menu, but I didn’t care. I walked over and sat down at a table next to a few other feverishly eating servers with my meat, my green beans, and about a third of my plate piled up high with kraut.

May there never come a day when I am too health-conscious to eat a Reuben.

At least I thought it was sauerkraut. I brought a full forkful to my mouth, and instead of the tang of the expected pickled cabbage, I was slapped in the face by an impostor–A mouthful of some sort of cooked sweet onions. Now I don’t mind cooked sweet onions, but NEVER do sweet onions taste as gross as when you are expecting them to be sauerkraut. I leaned over my plate, opened my mouth, and did the only thing I could do: I let the foul, half-chewed doppelgänger fall from my mouth back onto my plate. Disillusioned, I ate a few green beans and I pushed my plate to the middle of the table. Smelling the blood in the water, other servers swarmed the table within minutes. A friend inquired about the nature of the deceptive white food on people’s plates, and someone said, “They’re onions.” Before I could stop him, he had scooped up my rejected mouthful of onions and was chewing it, making faces and noises that let me know he was really enjoying his bite.

I was left with a moral dilema. Do I tell him that I recently spit out the bite he was currently enjoying? Or do I just let him happily eat it, ignorant to the fact that it was warmer and dryer before I chewed it and let it fall back onto my plate? I asked myself if I would want to be told…. And I decided to say nothing. I feel like I did the right thing (by the way–If you are reading this and you realize that it was you who ate the pre-chewed onions, I am so, so sorry).

I long for the days when the only Pink Slime I had to worry about was the kind that would fall on someone's head if she said, "I don't know" on Nickelodeon.

I was reminded of this cautionary tale when the whole story broke about “Pink Slime.” I didn’t really want to know about the existence of Pink Slime, or, as the meat industry calls it, “Lean Finely Textured Beef” (LFTB). For those of you who don’t know or haven’t heard, here’s the basics of Pink Slime: It’s basically the usually non-edible parts of the cow that are heated, mechanically separated, put in a centrifuge to separate the fat from the “protein paste,” treated with ammonia to kill all the diseases, ground up and squished into blocks that are flash-frozen and added to ground beef as a filler (up to 15% of ground beef that we buy in the store can be this sort of “filler” without even having to be labeled). Jon Stewart called it an “ammonia-soaked centrifuge-separated byproduct paste.” If this doesn’t make you hungry for a hamburger…. I think I was happier not knowing.

I figure if God didn't want us to eat animals, he wouldn't have made them out of meat....

When I was a kid, I was blissfully ignorant of the fact that the stuff I was eating was crap. A lot of nights, I would make my own dinner. I grew up eating Kraft Macaroni & Cheese (later Cheese & Macaroni), Pimento Loaf and Mayonaise Sandwiches, and Chef Boyardee Beefaroni. And I loved every bite. I didn’t even mind later that night when I burped after eating the Beefaroni and a stubborn little piece of (what I could only assume was) beef jumped back into my mouth. I would simply do the respectable thing and give it a couple of extra chews and send it back down. And I would never give it a second thought that my Pimento Loaf and Mayonaise Sandwiches (or the less appetizing “PLAMS”) would sit in my unrefrigerated bag for a good four hours each day until it was time to eat it. You know, I think it was probably Miracle Whip…. So “PLAMWS.” 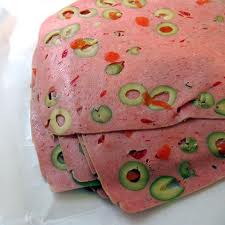 Fast forward some years later, and how things have changed. Here I am, married into a very health-conscious family, and now I find myself actually LOOKING at expiration dates of foods. There was a time when I would have just squeezed past the disturbingly thick part of the 3 year-old Ranch Dressing to get to the part that had the normal-ish consistency–Now I just throw it away. There is a merging of food traditions that happens when you get married. For example, my wife might throw away a jar of spagetti sauce that has been in the fridge for over a week…. whereas I can clearly remember scraping off the moldy part of the sauce to get to the “fresh” part underneath. And now, I’m not allowed to feed my kids bologna. My kids will almost certainly never know the joy that is Pimento Loaf…. I don’t think that it helps people be less grossed out that they use the word “loaf.” Loaf. I am honestly sitting here with a computer in my lap, laughing at the grossness of the word “LOAF” when applied to meat product. I don’t even know me anymore…. 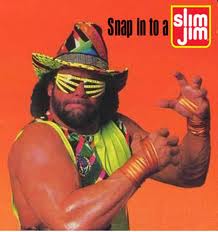 Merry Christmas, Everybody!!! And RIP, Macho Man.... We barely knew you.

So now, a lot of the things I eat are very different than before I met my sweet wife, but she has made some compromises as well. I put up with the occasional 20 minute drive to Whole Foods to buy “the good kale,” and she puts up with me enjoying the occasional Slim Jim. There is bittersweetness too–I am happy that my kids are going to grow up eating foods that are better for them than the powdered cheese-laden Kraft Mac & Cheese that I enjoyed as a child, but I’m also sad. Sad that they have already been stripped of the blissful childhood ignorance that I enjoyed–where the “healthy” SpaghettiOs was the can without the hot dog pieces. I’m learning to take better care of my body by making better food choices…. However, I don’t thing I will ever be willing to give up having a Slim Jim here and there–My mom still puts them in my stocking at Christmas, and God willing, she always will. I don’t see why people have a problem with Slim Jims anyway–Anything gross that is in their meat will almost certainly be expelled from your body by the diarrhea that is sure to follow.

What are some things that you know are awful and still keep eating?

p.s. My wife reads through my posts before I publish them, and she pointed out that the two men I have pictured who are promoting the joys of meat are both deceased. So that’s one point for the wife….