“We should go skinny dipping.” The words cut through the evening heat like a sexy summer breeze. It was the sort of hot where people don’t even go outside until after the sun goes down, but the air was still and the night brought no relief. We were young, we were in college, and our clothes were sticking to our sweaty skin—There weren’t a whole lot of other options than to find some water, get naked, and go swimming. So a caravan of about 20 of us drove through the darkness to a little lake that wasn’t too far away. The guys took our clothes off first (as is often the case), leaving our clothes by big tree and running for the water. The girls cheated (as is often the case) and made their way into the lake in the safety of their undergarments, and then took them off in the privacy of the dark water—all the while keeping them securely in their hands. Prudes…. 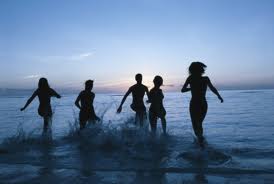 I haven’t been skinny dipping in a long time. I could have just left the word “dipping” out of that sentence….

So there I am, close to an hour later standing in water that has, by this time, lowered my core temperature a solid four degrees. Nobody else in the water acted like they were ready to leave, so I waited for  a time when no one seemed to be paying attention, and I snuck up to the tree (which, in the haze of hypothermia, looked much farther away than when I arrived) to look for my drawers. There was a little bit of moonlight, but not enough to for me to locate my boxers. Apparently, there was enough light to see something (“moon light,” get it?), because as I was bent over feeling my way through piles of clothes, someone in the water yelled, “Hey, look at that guy’s ass!!!” I felt like the guy on Fear Factor who is underwater looking for the key that fits the lock–I frantically searched for my clothes, but the laughter of my peers (combined with the poor decision making that comes with a 94° body temperature) compelled me to pick up the first thing I grabbed…. Which happened to be a pair of women’s jeans. They were surprisingly comfortable. 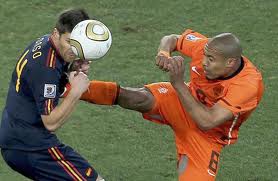 The very deadly and seldom seen Dutch Ninja kick. That’s not a soccer ball in the picture–It’s actually that dude’s brain.

I have never had very good luck with skinny dipping. In high school, a police officer broke up a group of us night swimming sans suits on a beach that was closed. Some people turned themselves in, but I (Dutch Ninja that I was) darted behind a tuft of beach grass. Turns out I was not as stealthy as I thought. The officer was nice enough to let me grab a towel before I went up the hill, stood next to the police cruiser, and gave them my information. The other officer at the car asked for my name, and I giggled out the name “John Smith.” It didn’t seem like she was in the mood for jokes, though, as my attempt at humor was met with a very serious, “If you give me a false name, you’re going to jail.”

I did a whole lot of stupid things growing up–And quite a few of those stupid things were illegal. I was a pretty good kid, but I definitely broke the law. At one point, I had a cigar box full of Cadillac hood ornaments (I’m not proud of this). Heck, I break the law every time I step into a car. If every time I broke the law I was caught, I would definitely be in prison right now. Which would be a shame, because I feel like I’ve got a lot to give to society. Also, you all would probably get tired of reading blogs about me being brutally beaten and sexually assaulted…. Most of you.

No society in history has imprisoned more of its citizens than the good old “Land of the Free.” Right now, more than one out of every 100 American adults is either in jail or prison. The US has only 5% of the world’s population, but holds one quarter of the world’s prisoners. As startlingly bad as these statistics seem, the stats are way, way worse for you the darker your skin gets. Consider this: 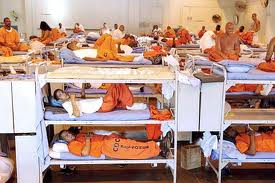 In The Netherlands, people wear orange for a whole different reason. They actually just closed a bunch of prisons for lack of prisoners…. Imagine that.

Now, add to this disgusting and disgraceful situation a fairly recent phenomenon: For-Profit Prisons–Seriously, just say the words out loud, and taste the insanity of it. It is what it sounds like: Large corporations that take over prisons in order to make a profit off the prisoners. These corporations actively lobby congress to pass laws that not only put more bodies into prisons, but also incentivize keeping prisons and detention centers filled up. They make deals with the states to insure that the prisons with be kept at least 90% full. The largest of these corporations is headquartered right here in Nashville–Corrections Corporation of America (CCA). In 2010, CCA had revenue of $1.7 Billion (and, for those who care, an executive compensation package for its CEO Damon Hininger of $3,266,387–Not a bad gig, if you can stomach it). Earlier this year, CCA sent letters to state officials in 48 states and offered to run their prisons for a profit…. It’s growing and growing. And it has got to stop.

People generally don’t care about what they can’t see, and we don’t see the horrors that go down inside prisons. Last month a federal judge in Mississippi described the conditions in one of these For-Profit Prisons as being “A picture of such horror as should be unrealized anywhere in the civilized world.” Most Americans feel like the people who have been condemned to prison are in there for a reason, but how much justice can there be in the whole system with statistics like the ones mentioned above? By just about any standard, I could be incarcerated right now for the sins of my youth. They say if you steal $5, you’re a thief; if you steal $5 million, you’re a financier. It has been over five years since the financial meltdown that was caused by criminal recklessness of very wealthy and greedy people (who sold things they knew were worthless and dangerous), and I don’t think that anyone has served any time yet. But get caught selling crack in the hood, and your ass is going to jail. Quick. 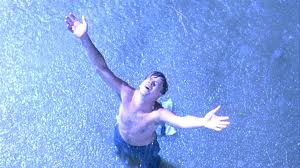 This is what David said about God: “He upholds the cause of the oppressed and gives food to the hungry. The LORD sets prisoners free.” Here is what Jesus said about himself: “The Spirit of the LORD is upon me, for he has anointed me to bring Good News to the poor. He has sent me to proclaim that captives will be released, that the blind will see, that the oppressed will be set free.” And this is not some sort of spiritual metaphor–The translation literally means to “release the prisoners.” He tells us that “whatever you did for one of the least of these brothers of mine, you did for me.” And lastly, here is what the writer of Hebrews has to say about it: “Remember those in prison, as if you were there yourself. Remember also those being mistreated, as if you felt their pain in your own bodies.” 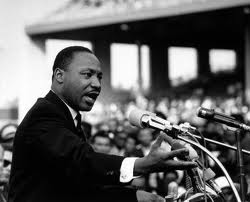 “Injustice anywhere is a threat to justice everywhere.”

Jesus never talks about the mission of his Church having anything to do with passing laws to get more people locked up–He tells us to go and love the people who are locked up. He tells us that when we go to visit the prisoner (whom he refers to as “brothers”), we are going to visit HIM. When he is on the cross and the prisoner (who admits he deserves to die for his crime, so he probably did something pretty bad) next to him says, “remember me when you come into your Kingdom,” Jesus tells him he’s going to Heaven–No “Sinner’s Prayer,” no baptism, no nothing. And Jesus is like, “Hey Murderer, you’re in. Welcome to Paradise….” And he said he’s in the business of releasing the captives and setting the prisoners free.

If the Church is ever going to be taken seriously by the world, it’s probably going to have to start doing what Jesus said. And that’s more than just praying for the prisoner–It’s going to talk to him, being his friend, and even working toward changing inherent injustice. Given the choice between someone who prays for justice and someone who works for justice, I’m choosing the worker. Anyway, I’ve never visited a prisoner before, and I’m ashamed of that. That’s going to change soon, though. Who’s coming with me….

This entry was posted in 4) All Of The Above and tagged Corrections Corporation of America, For-Profit Prisons, Incarceration and Race, Injustice, Jesus, Martin Luther King Jr, Shawshank Redemption, Skinny Dipping. Bookmark the permalink.