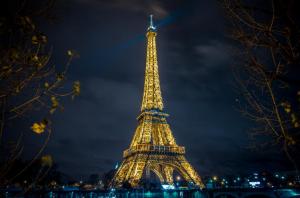 Like many of you, I have had tears in my eyes all night. I have been watching the stories come in about these murders in Paris, and just like everyone else, my heart is breaking. It breaks for the families of all those people who lost their lives today. It breaks for all the ones who are injured and hurt and fighting for their lives. It breaks for the people around the world who have grown accustomed to being blamed for acts of terrorism because a perversion of their faith continues to lead a demented few to carry out horrible acts of violence. And it breaks for all the people around the world who are allowing this evil to seep into their soul and make them a little more filled with fear than they were the day before.

Already people are beginning to blame Syrian refugees and immigrants for what happened today… And this sort of thing is tragically predictable. The tendency is to let something like this push people further into fear and hatred of “The Other.” Immediately people begin pointing fingers. And asking the question “Who is to BLAME for this?” But I don’t believe that the blame lies nearly as much in the “Who” as it does in the “What.” WHAT is to blame for this? And the answer is fear. And hatred. The blame is not on a culture or a heritage or a religion… The blame is on an ideology of separation. One that constantly pits Us versus Them. It is a disease, and if we’re not careful, we can catch that disease through the pain of watching all this suffering at the hands of people committed to spreading their toxic ideology of separation.

Because when we line up with fear and hatred for The Other, we line up along side of the very sorts of people who committed these terrible crimes. There are two ways this can go: We can let it fuel our suspicion and fear and hatred of The Other, or we can let this solidify our solidarity against the kind of suspicion and fear and hatred that leads to tragedies like this happening. When we react with the same fear and hatred that caused this violence, we embrace their ideology. We fight on the same side as the ones killing people in theaters. Because there is a fight… But this is not a fight against Islam. This fight is against the very idea that some members of humanity don’t deserve to live. This is a fight against hatred. It is a fight against darkness. And the only way to fight hatred is with love. The only way to fight darkness is with light.

The fight is not against Islam.

And all over social media, people are writing “Pray For Paris” (and “Pray For Japan” because of an earthquake that got overshadowed by the tragedy in Paris today). And those prayers are fine and good. People are asking God to be “with” the many people who are hurting all over the world in a special way today. We all have differing understandings of what happens when we pray… I happen to be a person who believes that God is always with us. He celebrates with us in the good times, and he grieves with us on days like today. So it always hits my ears a little weirdly when people ask God to “be with” people… As if he’s ever not.

But if you’re the praying type, here are some other things to pray for: Pray that these acts of separation and violence do not lead us to embrace an ideology of separation and violence. Pray for the millions and millions of peaceful Muslims all over the world, who–every time these maniacs do something like this–have to deal with a whole new round of ignorance and prejudice. Pray for the Christians whose fear and hatred could easily lead them into being the same sort of maniac. Pray for your own heart–That it might be even more like the heart of God… One that loves its enemies. Pray that we all understand the God IS with us… And when it feels like he is nowhere to be found, God is with us when we are there for each other.

Photo by Christian Hartmann/Reuters… “God is with us when we are there for each other.”

So in this moment of sadness and cynicism and terror and tears, let us not fan the flames of fear. Let us not start pointing fingers before the investigation is completed. Let us not allow this tragedy to separate us even more into “Us versus Them.” Into tribes. But let us proclaim–with our words and our lives–that even in this dark time, love is stronger than hate. And the darkness is no match for the light… Even when things seem so very dark.

Once again, I want to thank my Patrons. You should have some special gifts coming your way shortly. Thanks to Dr. Betty Malkus for believing in what I do enough to help support this blog. Thanks to everyone who helps out… So sad today.