His name is Jagmeet Singh. And chances are good you’ve probably seen his face pop up on your social media over the last few days. At a recent campaign event in Canada, he was interrupted by a irate woman who confronted him about his support for Sharia Law (a system of laws based on Islam), as well as his ties to the “Muslim Brotherhood.” She got in his face and accused him of not telling the truth about his sinister Muslim plans for Canada… The only thing is, Jagmeet Singh is not a Muslim. He is Sikh. Which (it turns out) is a totally different religion. I realize it can get confusing for some folks… When they see brown skin, a turban, and a beard, it can be very difficult to not assume, “This person is definitely personal friends with Osama Bin Laden.” 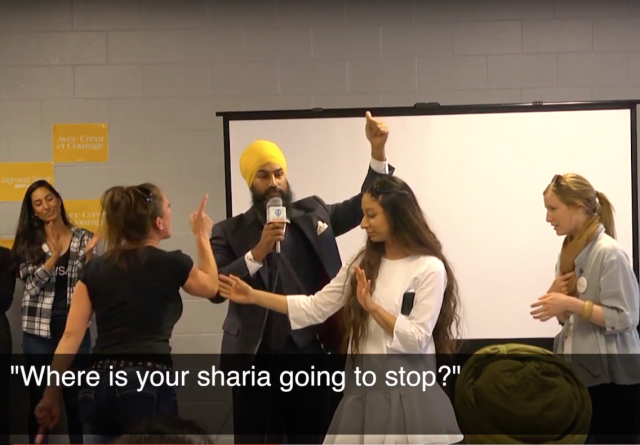 The video has gone viral because of the graceful way that Mr. Singh handled the hatred and Islamophobia and irrationality of the woman (named Jennifer Bush–a member of a white nationalist group in Canada named “Rise Canada” that called Islam “a barbaric ideology of hate that must be banned,” and proposed “a permanent ban on all Muslim immigrants PLUS mass deportation​ of existing Muslims.” She identifies as “christian,” and I’m sure I don’t have to tell you which American presidential candidate she supports). But this post is not about tearing down another ignorant, hateful, racist person who is scared of people who look different… It’s about highlighting the coolness of the response to that hatred. If you haven’t watched it before, you should definitely take a couple minutes and enjoy a master-level course in how to respond to hatred & ignorance with “Love & Courage.”

We’ve all seen these sorts of confrontations before. It’s become all too common in the United States to see white people angrily and fearfully confront someone who looks different than them or speaks a different language, lashing out in response to the general sense that their privilege is slipping away from them. As it turns out, there are also quite a few people living with our neighbors to the North who like wear their deplorableness and lack of common decency like some gross badge of honor. So we’re used to seeing people act like calls for equity and diversity are some sort of personal attack on them and their precious whiteness… What is a little LESS common is to see the people they are lashing out against respond with such dignity and kindness. It’s not always easy to keep your cool when some racist lady is pointing her finger in your face. As the woman was shouting at him, here is one of the things he said:

Later, after the lady finally left, he told his supporters, “You know, growing up as a brown-skinned, turbaned, bearded man, I’ve faced things like this before. It’s not a problem, we can deal with it.” In the wake of the video going viral, many people wondered why Jagmeet Singh didn’t simply inform the woman screaming in his face that he actually was not a Muslim, but was–in fact–Sikh. Enough people asked him this question that he thought he should answer with a public response. And it was a thing of beauty. Here is his amazing response…

Just in case some of you are reading this on your phones, and can’t see it clearly, here is his statement:

“As part of my campaign to become the leader of one of Canada’s largest political parties, I held an event in the city where my political career began.

I walked into a room filled with supporters and old friends. As soon as I was introduced, a person confronted me with angry, hateful, and Islamophobic comments. I had to act fast to set the tone for the room.

Despite this person’s anger and hate, I told them that we loved them, respected them, and would protect their rights.

I chose not to answer the questions asked because I rejected the premise. Many people have commented that I could have just said I’m not Muslim. In fact, many have clarified that I’m actually Sikh. While I’m proud of who I am, I purposely didn’t go down that road because it suggests their hate would be OK if I was Muslim. We all know that it’s not. I didn’t answer the question because my response to Islamophobia has always been and will always be “hate is wrong.”

Once allowed to grow, hate doesn’t pick and choose, it spreads like fire. Once we say it’s OK to hate someone based on their religion, we’re also opening the door to hate based on race, gender, sexuality, and more.

It is important that we stand united against all forms of hate.

It takes love to understand that we’re all in this together. It takes courage to come together, demand better, and dream bigger, so that we can build a world where no one is left behind.”

With love and courage,

So just in case you missed it, a man was being accosted by an irate person in front of a crowd because she mistakenly thought he was a Muslim… And instead of explaining that he wasn’t a Muslim to get her to stop shouting and leave him alone, he explained to her that she was loved and supported, and encouraged onlookers to be loving and full of courage. That’s good religion. And no matter what you believe about God, we can learn from this good reaction. If someone is being discriminated against, the point is not to differentiate between yourself and the group that is being oppressed… The point is to declare with your words and your heart and your life that HATE IS WRONG. And where Christianity misses this point — where ANY religion misses this point — that religion gets it wrong.

Sikhs believe “that the Divine is equally present in all people, and that, therefore, every human being is equal in the eyes of God.” The woman in the video believes that Divine is on her side, and God is against everyone who doesn’t believe the same things she does. There is a schizophrenia within Christianity. Many profess to believe that “God loves everyone” while believing that God is on OUR side and against THEM. Many Christians say “God is love” while proclaiming that an all-powerful, all-loving God created a system where the vast majority of humanity is going to end up getting tortured forever. Either we are ALL created in the Image of God, and God actually is love… Or God is a monster who is only “FOR” a few and “AGAINST” the rest, and chances are very slim that we are on the “FOR” side.