Yesterday, a subcommittee in the Tennessee State Legislature was presented with a resolution denouncing neo-nazi, white supremacist, and white nationalist groups. The resolution was filed on August 17, 2017… just five days after the “Unite The Right” white supremacist rally in Charlottesville, Virginia that left many people injured and took the life of Heather Heyer. It was introduced by Rep. John Ray Clemmons (Democrat, Nashville), and has been working its way through the legislative process ever since. You can read the resolution in full RIGHT HERE, and you can see its history RIGHT HERE. It died in subcommittee for lack of a “Second” just a few days after a white supremacist group its “national conference” here in Tennessee, and marched through Nashville’s Centennial Park. I know most people don’t click and read through resolutions, with their copious use of the word “Whereas,” so just in case you don’t read it yourself, here are the Cliff’s Notes version of what it said:

And THAT, ladies and gentlemen, is the “controversial” stance that could not manage to get even one “Second” from ANY of the republican members of the House State Government Subcommittee. These hearings are recorded, but they are long and hard to get through. I recorded the 40 seconds it took to kill this common sense resolution basically saying “We think naziism and white supremacy are dangerous and incompatible with our ideals as Tennesseans.” Please notice how they can’t even make eye contact…

In a comment to The Tennessean, Clemmons said, “I would love to try to pass a resolution denouncing white nationalists and neo-Nazis, but if I can’t even get a second in a subcommittee, it evidences this Republican supermajority’s refusal to denounce these hate organizations, for what reason I cannot begin to imagine.” Well… I CAN begin to imagine.

You may have heard about this story already. It was initially reported in THIS ARTICLE by Natalie Allison in the Tennessean. The story was later picked up RIGHT HERE by The Hill, and that post has been shared more than 16,000 times as I write this. It turns out people get a little bit angry and frustrated when their elected representatives refuse to say something as simple and self-evident as “We think nazis are bad.” 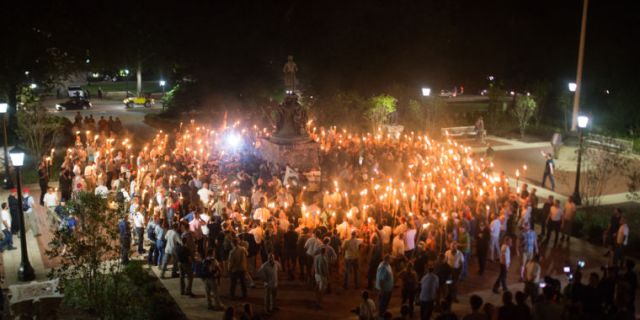 White supremacists in Charlottesville yelled, “Go the fuck back to Africa!” and “Fuck you, n—–!” and “Dylann Roof was a hero!” But, as Donald said, “You have some very fine people on both sides.”

An important piece of information that was missing from both of the above stories was this: The NAMES of the subcommittee members (all of them republicans) who sat in silence as their colleague looked for a “Second” on this resolution. I contacted Natalie Allison and asked her about the decision to leave out the names of the republican members of the subcommittee, but to include the name of Rep. Darren Jernigan, the only member of the subcommittee to lend his support to the resolution (and also the only democrat on the subcommittee). She told me that the names of the other members were included in the article she submitted (along with her attempts to contact those members), but the names were removed in the editing process. I contacted Duane Gang, the political editor at The Tennessean, to ask why this was done, but as of yet, he has not responded to my requests for clarification on this (Update: Mr. Gang responded and let me know the article was updated with the names of the committee members who stayed silent. The updated article is HERE).

This is something I notice quite a bit: News outlets publish a story that is noteworthy because something that SEEMS like a common sense piece of legislation is stymied by the members of a committee… And they list the names of the people trying to get the piece of common sense legislation through, but they LEAVE OUT the names of the people who are effectively killing the legislation. I think this is bad journalism. They want the buzz (and clicks) of publishing a story that makes people feel outrage, but they don’t provide the names of the legislators causing that outrage. If these people are going to shamefully sit in silence, looking down at their papers, as one of their colleagues asks them to stand up and say, “Naziism and white nationalism are incompatible with the ideals of Tennesseans,” then those people need to feel the sting of the public backlash for their cowardice and complicity.

So here are the names and contact information of the members of that subcommittee (all of them coincidentally republicans) who refused to back this resolution:

Mary Littleton is the other republican member of the subcommittee, but she was not at the hearing, because she is recovering from surgery. I contacted her office to ask if she would have supported the resolution… I have not heard back from her. I reached out to ALL the people on this list to ask about the reasoning behind their refusal to give a “Second” on this resolution. As of yet, none of them have responded. One staffer seemed to indicate that it might have been the reference in the resolution to these groups as “domestic terrorists,” and that this language seemed a bit strong. He also mentioned something about free speech. And before I finish writing (and you blast the elected leaders who didn’t feel comfortable saying “Nazis are bad”), I’d like to speak to this…

The KKK is America’s original terrorist organization (The O.T., if you will). These new groups — whether they are calling themselves “White Nationalists” or “Neo-Nazis” or “Alt-Right” or any number of other monikers denoting white supremacist, anti-immigrant, anti-Semitic, xenophobic,  bigoted, hyper-nationalist views — are pushing the same hate-filled message. As Shakespeare said, “That which we call a rose, by any other name would smell as racist.” And they are TOTALLY terrorist organizations. When they march, when they pick up their torches, when they open carry their guns… They are doing this to intimidate and threaten and terrorize. If you are a person of color, or an immigrant, or a Jewish person, and you see a group like this walking through Centennial Park, you are being terrorized. You don’t need to strap a bomb to your chest or have brown skin to be a terrorist. Of the 34 extremist-related murders in 2017, EIGHTEEN of them were committed by white supremacists. Over the last ten years, only 26% of the extremist-related fatalities have been the result of Islamic terrorists… but white supremacists account for 71% of the terrorist deaths in the United States. If you are worried about getting murdered by a terrorist, you are 273% more likely to get killed by a white supremacist than a Muslim. And we’re having this conversation while someone in Austin, TX is killing People of Color with bombs in packages.

But here in Tennessee, it seems the majority of our legislators don’t want to call white supremacists and neo-nazis “domestic terrorists.” And that is shameful. It is cowardly. And it is beneath us… As Tennesseans, as Americans, and as human beings.

Thanks so much to the people who have decided to become Patrons… To those who have been for a while, to those who just started recently, and to those who used to be, but decided to not be Patrons anymore. I realize people can’t support some blog writer indefinitely… I totally understand. If this blog is a thing thing you value, and if you’d like to support it, you too can BECOME A PATRON. If you just want to leave a tip or boost a post, you can do that ON PAYPAL. Or I’d love it if you’d follow me on Twitter or Facebook. The other way you can support my writing is by sharing this post with the people in your lives. Now go get your phone, and call some legislators…