I think I can prove to you that there is a God.

Bacon–More proof that God exists. The food, not the actor…. Fine. Both.

This has nothing to do with Heaven or Hell or Jesus (not right now, at least–Maybe later. Or earlier), so if you get freaked out by those things, you can relax for a minute. This isn’t an attempt to convert anyone to any religion…. This is just a simple matter of right and wrong, and right and wrong is not limited to one religious tradition. There is something greater than us out there–something that can’t be seen or measured, but we can all feel it and “know” it’s there–even though many people deny its existence. I realize that a lot of you don’t need any proof, but there are also a lot of people out there who carelessly toss around the word “Atheist,” and I don’t think you’ve really thought things through. Which is weird, because most people who would characterize themselves as an Atheist would probably also characterize themselves as being very rational. Lucky for them, I LOVE people who value rationality–Especially when I get to be the one to show them how irrational they are being.

Let’s not pretend: I’m not writing this for purely altruistic reasons…. I used to date a girl who smoked (I know, right? She tricked me–I started liking her before I knew). I really wanted her to stop smoking. I gave her all kinds of (what I thought were) great reasons to quit (“It stinks.” “It’s expensive.” “It will make you wrinkly.” “It stinks.” “It’s terrible for you.” “You’re going to quit someday–why not now?” “If not for you, do it for me!” Did I mention “It stinks?”), but she kept on smoking, much to my chagrin. Then one day, a friend who was basically my mentor said to a group of people, “If you smoke, you should quit.” Of course THIS is the thing that got her to quit smoking…. I was insecure, and I was about as PISSED as I could be. I learned something about myself that day: It really wasn’t that I wanted the best for her. I wanted to be the one who convinced her what was best for her. There’s a big difference–One is loving, and the other is selfish. Anyway, I’ve grown up  some since then, but forgive me if part of the reason I’m writing this is because I get off a bit on changing peoples’ minds. 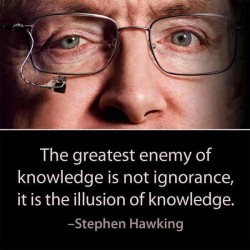 Really smart, but he’s got the God thing all wrong.

So, I’m far from the first one to use this reasoning (C.S. Lewis, Kant and John Henry Newman have all made similar cases, to name a few), but here it is: Morality exists. There are things that everybody (other than a random sociopath here and there) knows are right, and other things that are known to be wrong. We might not always make the right decision, but most of the time we know (or at least have a sense) which one is right (or at least better) without ever having to be told. And if this higher moral law exists, then reason tells us there has to be something greater than us (AKA a “higher power”) to put those objective moral truths in place.

Now, some people think that morality is just the result of some sort of  herding instinct that has been passed down–That we instinctively know moral truths because natural selection picked those of us who think that helping each other is the right thing to do. But here’s the thing: Many people avoid acting immorally even when it would be to their advantage to do so. And flip that around–Our conscience urges us to act morally even when it looks like it could get us hurt…. And self-sacrifice is not a very likely attribute to get passed down through the generations, right? Others might claim that morality is purely subjective–That what is right for one might be wrong for another–and sometimes this is true. For some, killing a cow for a meal is repugnant and even evil, but others see this action as a necessary means to provide the world with a ribeye steak–the sweetest cut of meat known to man. Going topless on a French beach might be just fine, while going topless in Destin will surely be viewed as immoral or “wrong” (thinking of all of the hits my blog will get now from people Googling “topless in Destin.”). But there are some things that we all know (as much as we can know anything) are morally right or morally wrong. I witnessed one of these clear moral truths the other night in my kids’ bedroom…. 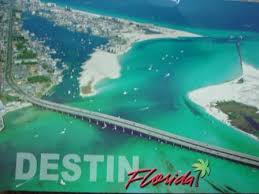 The sign at the city line says “Destin, Florida–Where white, middle-class Christians go to sit on the beach.”

First, know this: My son loves his pillow. He loves it like a junkie loves a pillow. That’s full of crack. Anyway, I heard giggling late at night long after the kids should have been asleep. When I went in to quiet them down, I found my boy in bed with his sister. We sometimes let this go if it’s quiet, but if they’re noisy? Nope. When I told him he needed to get back in his own bed, he screamed, “YOU’RE THE WORST DAD IN THE WHOLE WORLD!” and tried to kick me as I put him in the top bunk. As a result, he lost his pillow (a very serious consequence). He was…. I think “distraught” is too mild a term. Things finally settled down, but when I went in to check them before I went to bed, I noticed that the boy had somehow gotten his hands on a pillow. And that his older sister was missing hers (queue Dramatic Chipmunk music).

One of two things happened here. One was clearly morally wrong, and the other was about as morally right as things get. Either my son waited until his sister was asleep and pilfered her pillow, or my sweet daughter saw that the boy was inconsolable and sacrificed her own comfort to crying brother (I suppose there is a third option that is in a morally gray area where he bought her pillow using whatever currency elementary school students use and made her a deal she couldn’t refuse…. But you get the idea). One action was wrong in any culture at any time, and the other action was an act of selflessness and love that anyone would recognize as being morally right. Or, for lack of a better term, “Good.” Good and bad, right and wrong, love and hate–These things are bigger than us. They are a laws we are bound to at least acknowledge (though we are free to ignore) that are “written on our hearts.” And something, maybe even someONE, did the writing.

Mckayla Maroney is not impressed with the argument for Atheism. Neither am I.

So if the structure of a moral law exists, it makes sense that a moral entity/being would exist to hold up that structure up. However, the fact that this makes sense is only of value to a person if that person values things making sense…. This is getting a little too philosophical. The point is this: We all recognize right and wrong in The Case of the Pilfered Pillow (or “The Pillow Case,” as I also like to call it), even if we might disagree on the “rightness” or “wrongness” of other situational analogies. The moral choice is not clear in every decision, but sometimes it is clear, and those clear situations are Arrows that point to God. Had my son taken my daughter’s pillow, it would have been wrong–Just as certainly as everything in me knew that my daughter did something very right when she explained that she gave the boy her pillow “because he was sad, and I wanted to make him feel better.” This is the knowledge of God, even though some might try to deny it.

This entry was posted in 5) Not Quite Sure and tagged Argument from morality, Arrows pointing towards God, Atheism, Dramatic Chipmunk, Higher moral law, Proof That God Exists, Rationality, Right and Wrong, Stephen Hawking, Topless In Destin. Bookmark the permalink.

15 Responses to Proof That God Exists