Tennessee Is Requiring All Schools To Display The Words “In Allah We Trust.”

Of course they’re not… Can you imagine? People’s heads would literally explode. But what they ARE doing is requiring all schools to display the words, “In God We Trust.” So if you’re a Tennessee resident, keep an eye out for our state’s most recent step toward legislating and enforcing a theocracy when you drop your kids off at school this month — A law called the “Tennessee National Motto Act” (which passed quietly through the General Assembly this spring, and was recently signed into law by Gov. Haslam) requiring all Tennessee schools to “prominently display” the words “In God We Trust” in their buildings. My kids will be greeted by this sign in the front window of their school…

“WE TRUST GOD! (but don’t leave your car unlocked)

The bill says that the motto must be displayed in an area where students are likely to see it, and it can even “take the form of a mounted plaque or even student artwork.” Schools might ALSO be lucky enough to find some bearded theocratic tea partier from the area who is willing to make and donate a handmade “In God We Trust” plaque to their local school… That is, if he is willing to take time away from collecting nazi plates and weaponry to make it in his woodworking shop.

This bill was sponsored by Susan Lynn. Representative Lynn — apparently unaware that Tennessee schools contain some students who DON’T trust in God — was quoted as saying, “I think it’s a good message that we don’t trust in GOVERNMENT. It’s not in government we trust… it’s in God we trust.” Of course, sometimes government can be the last line of defense to protect people from the sort of dangerous religious fervor which demands everyone believe the same things about God… Though it doesn’t seem so in this case. Susan Lynn also said, “We hang the Constitution, we hang the Declaration of Independence and other historical documents in our schools, why not the National motto?” Ironically, it seems to me that “Hang the Constitution” is an entirely accurate euphemism for what a lawmaker is doing when she is REQUIRING PUBLIC SCHOOLS TO DISPLAY RELIGIOUS PHRASES.

For the first couple hundred years of America’s existence, the unofficial national motto was “E Pluribus Unum” (“From Many, One”). It was on our coins, and it was on the Seal of the United States of America. Then in 1956 — in the middle of The Cold War and The Red Scare and McCarthyism, and as a way of distinguishing America from those godless Russians — “In God We Trust” was adopted as our official national motto. It first appeared on the two cent coin during the Civil War (to send a message to the South that God was on the side of the Union), but wasn’t on all money until 1957. Around this same time, they added the words “under God” to the Pledge of Allegiance (before that, we were just “one nation, indivisible”), and a bunch of states decided to adopt state mottos with overtly religious themes (like Ohio’s “With God, All Things Are Possible” — a direct Bible verse).

Listen… The sorts of folks who make it a point to “fight” for crosses on public property, the 10 Commandments at courthouses, and having “In God We Trust” prominently displayed in public schools are the same kinds of people who like to tell themselves that America is a “Christian Nation.” But the founders of our nation and the framers of the Constitution took great care in trying to prevent the mixing of “church & state” which led to the persecution that inspired many of this country’s original immigrants and refugees to flee to America’s shores. And as Stephen Colbert has said…

“If this is going to be a ‘Christian nation’ that doesn’t help the poor, either we’ve got to pretend that Jesus was just as selfish as we are, or we’ve got to acknowledge that he commanded us to love the poor and serve the needy without condition, and then admit that we just don’t want to do it.”

These folks are the people who LOVE the 10 Commandments… But why are none of these people trying to get the Sermon on the Mount printed in stone outside of courthouses? You know why? Because they aren’t wild about what Jesus was saying on that mount. They want a Jesus with a sword instead of the Jesus on a donkey. They’re not interested in the “Love Your Enemies” Jesus… They want an “Eye For An Eye” Jesus. “Blessed are the PEACEMAKERS?!? Maybe if that “peacemaker” is an AR-15.” Imagine if they tried etching into stone the verse where Jesus says that if we want eternal life, we need to sell all of our possessions and give the money to the poor. For some reason, I don’t see people trying to make THOSE verses their state mottos…

Anyone: Rabbi —
Jesus: You know who is a major problem? The rich.

As a resident of Tennessee, I live in one of a handful of states whose legislatures are attempting to outdo each other with how much they can “legally” blur the lines between the separation of Church & State. This sort of thing is nothing new for Tennessee. Not too long ago, they tried to name THE HOLY BIBLE as the “Official State Book of Tennessee.” And I’m sure if that would have been signed into law, they would have tried to have all Tennessee schools “prominently display the State Book in their buildings” as well. 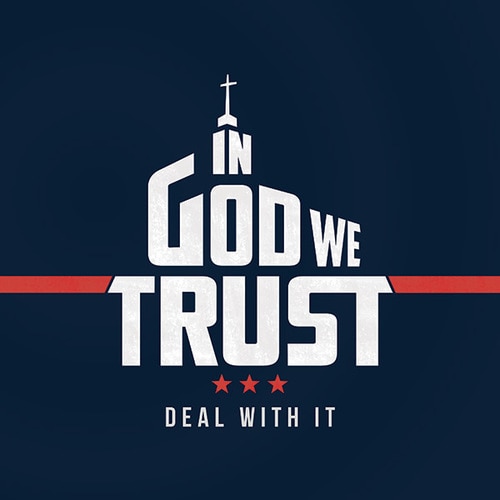 One can purchase a T-shirt with this design at a place called “Patriot Depot.” I assume it’s a lot like Home Depot… Only with less lumber and much more nazi memorabilia.

We are living in a time where the president (along with Jeff Sessions’ Department of Justice) is rolling out the “Religious Liberty Task Force.” We are living in a time where many people interpret it as an “attack on their religious freedom” when schools refer to it as “Winter Break” instead of “Christmas Vacation.” This is classic “Equality Feeling Like Oppression” stuff… and it leads to people trying desperately to defend their “right” to their Privilege.

And this is very similar to the mindset that wants to protect the “right” of “christians” to bully LGBTQ+ kids under the guise of “religious liberty.” This garbage “Religious Liberty Task Force” is nothing more than an attempt to ensure and enforce Christian Privilege in this country for people who are accustomed to their privilege, and can only interpret attempts at equality as oppression. The government’s responsibility should be to uphold and preserve the rights of minority groups looking for equality… NOT to protect the privilege that white christians fear is eroding.

This week, after my son had been displaying some pretty serious selfishness (a lot of the “Me first” stuff, along with the hypocrisy and budding narcissism that often comes with male adolescence), I tried to do my part to intervene, and hopefully nip any toxic masculinity in the bud. During part of our very long discussions, I had him write down rights that OTHER people are entitled to. Initially, he was having some trouble coming up with things, and I said, “Here’s an easy way to think of it: Think of the rights to which you believe YOU are entitled… And then just figure that other people believe THEY are entitled to those same rights.” All of a sudden, he had a very long list. It’s a basic exercise in human empathy. You “put yourself in someone else’s shoes,” and you ask yourself “How would I feel if I were them?”

But it seems we have moved far away from being a country of immigrants… A country which views its diversity as its greatest strength… A country of “E Pluribus Unum.” We become something less. We have become a country overrun with fear and ignorance… A country that forces its athletes to stand instead of kneeling to protest racism and police brutality… A country that enforces and legislates the name of the God of the majority being displayed in its public schools. And that’s a shame…

If you value this blog in your life, and you’d like to help support it, you can BECOME A PATRON. Or if you love a blog post and you just want to leave a tip or want to help boost a post, you can LEAVE A TIP ON PAYPAL. Otherwise, just follow me on FACEBOOK and on TWITTER… or simply share this post with the people in your life. One the thing you CAN do — especially if you’re a Tennessean and you don’t appreciate these stupid signs in schools — is this: DON’T BE AFRAID TO SPEAK UP. Talk to the administration at your area schools, Voice your displeasure. Call your representatives. Don’t make it easy for them to take steps toward theocracy and fascism. Oh… also, I love y’all.

7 Responses to Tennessee Is Requiring All Schools To Display The Words “In Allah We Trust.”