That’s what they are… They are laws designed to make it legal for white people to kill black folks when those white people feel threatened… And there are few things more threatening to white people than Blackness. It happened when George Zimmerman legally murdered Travon Martin. It has happened many times since then. And it has happened yet again with the legal murder of Markeis McGlockton by a man named Michael Drejka. Here is what happened…

Markeis McGlockton, along with Britany Jacobs and their three young kids, pulled up to a convenience store, and he parked in a handicapped parking spot. Markeis and their five year old son went inside while Britany and their two younger kids waited in the car. While they were waiting, Michael Drejka approached the car and started yelling at her about being parked in a handicapped parking spot. The yelling escalated. Someone went inside to tell the cashier about the argument outside, and Markeis came outside to see a man yelling at the mother of his children, so he pushed him. He didn’t continue toward him… he didn’t start hitting him… He didn’t pull out a weapon… He pushed him down. Moments later, Michael Drejka pulled out a gun from his waistband and shot Markeis in the chest. Shortly after, he died from the wound… as his 5 year old son watched him die.

The shove and the murder were captured on video. Here it is right here…

That was it. No arrest was made. Markeis shoved a man who was yelling at his girlfriend, and for that, Drejka is legally allowed to send a piece of lead tumbling through his vital organs. A black man shoved a white man who was aggressively yelling at the woman he loved, and for that he received a death sentence… And it’s all legal. In the words of Britany Jacobs, “He was a good man, and all he was trying to do was protect his family.” 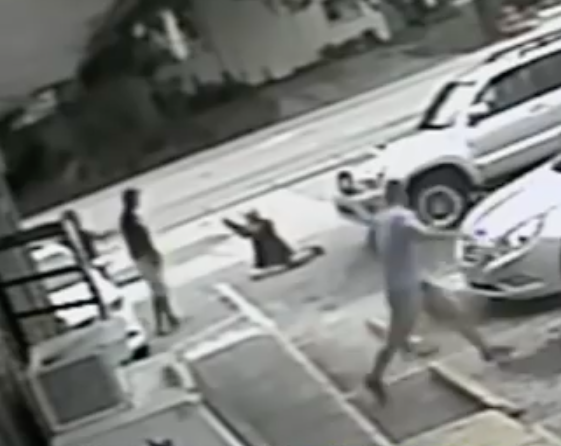 I’ve gotten shoved down many times in my life… Turns out I would have been justified in killing the people who shoved me.

This isn’t the first time that Michael Drejka has gotten into arguments over parking spots at that particular Florida convenience store. The store owner said that in the past he has had to call the police before over Drejka confronting people over their parking at the store, and other patrons who frequent the store have reported angry encounters with Michael Drejka where he has picked fights, used racial slurs, and threatened to kill him. It seems like picking fights with People Of Color was something of a habit for this man.

If this upsets you, congratulations — You have a functioning sense of justice. Stand Your Ground (SYG) laws are inherently insane. I’ve written about the crazy injustice of SYG laws multiple times before (“If You’re Black, ‘Standing Your Ground’ Will Get You 20 Years,” “Trayvon Martin and Dutch Ninjas” and “There’s No Such Thing As An Unarmed Black Man” to name a few). These awful laws have been used to successfully defend people who walked to their car to get their gun, as well as granting immunity to a man who shot a mentally ill acquaintance for making a verbal threat. In the case of Trayvon Martin, they allowed a man to stalk an unarmed 17 year old through a neighborhood, and then when THAT teen defends himself (standing his ground), the killer is legally “justified” in using lethal force. In this current case, a man is allowed to aggressively verbally accost a woman in a car with her kids, and then when the father runs to defend her, the killer is “justified” in shooting the man defending his family.

Stand Your Ground laws have never been about Justice… They have ALWAYS been about power.

It probably won’t surprise you to find out that these unjust laws disproportionately affect People Of Color. In a STUDY BY THE URBAN INSTITUTE, they found that in SYG (more than half of the states in the U.S.) cases where a white person shoots a black person, the action was found to be “justifiable” in 17% of the cases… While in cases where a black person shoots a white person, that same defense is successful only 1% of the time. In Stand Your Ground states, white-on-black homicides are 354% more likely to be ruled justified than white-on-white. Please read that sentence again… And then ask yourself what the likelihood is that a Jeff Sessions-led Department of Justice will investigate the reasons behind this disparity. NOT too damn likely. This is why NFL players take a knee. And this is why it desperately matters who you vote for.

There will be more black fathers who leave behind scarred kids when terrified white people — emboldened to “shoot first” out of hatred, fear, and lack of consequences — take the lives of men whose very blackness has been weaponized. These laws are unjust and immoral, and they have to be changed. Think about it… If Markeis McGlockton had been armed, it would have been legal for him to shoot Michael Drejka. “Legality” is not a very good indicator of morality. Someday in the future, our grandkids will look back at these unjust murders in the same horrified way we look back at the “legal” lynchings during slavery and Jim Crow. We must come to our senses. It MATTERS who you vote for.

Stay hopeful, my friends. Thank you again to my Patrons. If you value this blog, and you’d like to help support it, you can BECOME A PATRON or you can LEAVE A TIP ON PAYPAL. The other way you can help support me (or any writer) is just to share the stuff you love. Share it on FACEBOOK. Share it on TWITTER. Share it wherever. Stay active. Stay angry. But most of all, stay hopeful. And VOTE.