I am so grossed out with the time we are living in. Every day it’s something new and horrible to observe… Something which — just a few years ago — would have seemed unthinkable, but is now tragically predictable. This GOP administration is one hot bowl of festering awfulness after another… And this whole Kavanaugh hearing is just amplifying the smell of the moral decay at the heart of the republican party. This past week has been brutal… And this week doesn’t look too good.

Next week has been exhausting. 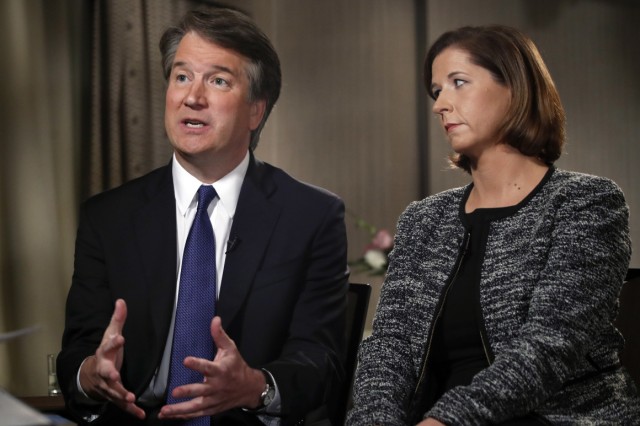 Your face is ALL of our faces, lady…

Dr. Christine Blasey Ford has received medical attention for the trauma she endured at being sexually assaulted by Brett Kavanaugh. She is not “making up this story to keep a republican nominee out of the SCOTUS,” as so many have accused her of doing. She has been working through healing from this attack with her therapist for YEARS, and she felt compelled to send a letter to Senator Feinstein when faced with the choice between staying silent or watching her attacker get nominated for a lifetime appointment to the Supreme Court. You can read the letter she wrote her MONTHS ago RIGHT HERE. Dr. Ford has repeatedly asked for an FBI investigation into the matter… A request which every republican has denied. The act of requesting an FBI investigation is not something which is normally done by someone who lying… Just as the act of DENYING a requested FBI investigation is not something which is normally done by people who actually believe the investigation will clear their person’s name.

Accusers: we want law enforcement to vet our stories.

Kavanaugh and GOP: we don't want law enforcement to vet this because something something the women are lying! Believe me!

Anyone with a brain and a sense of fairness can plainly see the Kavanaugh camp is afraid & hiding.

"She was drunk, this rape is her fault."

"He was drunk, this rape isn't his fault.

And now more women have come forward (as is almost always the case), but they are forced to submit their painful stories to the sort of men who use terms like “Rape Culture” as a punchline… Men who think of “Making America Great Again” as a return to a nostalgic time when women weren’t so offended by getting spanked on the ass every once in a while… A time when they weren’t feeling so EMPOWERED to throw a fit over some “good-natured” sexual assault.

The entire hallway is in tears. We are at a moment in history where women have to repeat their trauma to the masses to literally beg Senators to vote with moral clarity. #StopKavanaugh #BelieveSurvivors #BeAHero pic.twitter.com/Ky26a9fPTf

There are now THREE different women accusing Brett Kavanaugh of sexual assault or sexual harassment (possibly FOUR)… And he seems to think that a claim of virginity until after college absolves him from being guilty of sexual assault.

Adult male virgins are certainly most famous for having healthy attitudes towards women.

Brett Kavanaugh: Not me, I’m a virgin!

Looking forward to the part of the week where a testifying woman is held to a higher standard than a guy who doesn’t think virgins can commit sexual assault.

Is this the sort of legal mind we want deciding our most important cases?? The man accused of being in the room with Kavanaugh (who is still his good friend) while he attacked Christine Blasey Ford has written longingly about the “ambiguous middle ground, where the woman seems interested and indicates, whether verbally or not, that the man needs to prove himself to her. And if that man is any kind of man, he’ll allow himself to feel the awesome power, the wonderful beauty, of uncontrollable male passion.”

Call me crazy, but I think having 17 year-olds worry that any sexual assault they commit now might follow them around for the rest of their lives would be a GREAT thing

And for those dismissing his actions at his prestigious prep school because he was only 17 (an age young men regularly get tried as adult), there are allegations of assault while he was in college. For goodness sake, there are pictures of Kavanaugh holding a flag made of stolen women’s bras and panties from his time in the DKE fraternity… A frat known for its rapes and assaults, and a frat which eventually got kicked out of Yale for chanting “NO MEANS YES. YES MEANS ANAL” in front of the university’s Women’s Center. Yes, you read that right… He belonged to a secret society known as “Tit & Clit.” And now President Pussy Grabber wants him making Supreme Court decisions about Women’s Rights…

It’s not just Kavanaugh’s actions that are so disheartening… It feels like it’s coming from every angle. Franklin Graham says that Kavanaugh “respected” Ford by not going through with the rape. A man (a white man, obviously — A black man would be in jail for a very long time) who kidnapped a native woman, choked her, and masturbated onto her unconscious body WON’T be given any prison time, because he says he feels bad about what he did. Lindsey Graham says that Ford’s testimony won’t change his vote — Essentially saying that he doesn’t care if it DID happen — and his main concern is with ruining the reputation of the man being accused, rather than justice for the woman he assaulted. MANY people seem very concerned about our sons being “falsely accused.”

You mean like Trayvon Martin’s mom? Or Tamir Rice’s mom? Or Jordan Davis’s mom? Or Bothem Jean’s mom? See you’re just now horrified. Black folks been horrified for our sons for decades. And not only were they falsely accused- they were executed. https://t.co/Bja0CnfKWi

FYI, “Suburban Mothers” is code for WHITE mothers. And as good and true as the response to this asinine tweet was, I am way more worried about my daughters being sexually assaulted than I am worried about my son being falsely accused of sexual assault. I don’t know why I’m surprised… These are people who heard audio of a man bragging about sexual assault — a man accused MULTIPLE TIMES of rape and sexual assault — and STILL voted for him. I doubt it would matter one bit if every allegation against Kavanaugh was proven true.

We could literally have a tape of Kavanaugh bragging about this assault and it wouldn’t matter. Didn’t matter with Trump. We don’t need more evidence. We need leaders & an electorate that believes sexual assault is wrong. https://t.co/jhmDKv3lb5

The only thing which gives me hope right now is the amazing strength I see coming from the strong, powerful women who are brave enough to tell their truth — even though they know the world is still so fucked up right now that speaking up will probably ruin their lives. It is inspiring to see, and it gives me hope.

A woman is trying to protect us from putting an attempted rapist on the Supreme Court, and she’s going to be destroyed for it, and she knows it, and she’s doing it anyway.

If you are having trouble seeing reason to be hopeful in this dark, dark time — If it’s hard to see through the daily tears — focus your attention on the bravery and strength and eloquence of the women coming forward to stand up for justice and equality. When all you can see is how far we have to go, focus on how far we’ve come. Focus on the beautiful solidarity of the women in this video:

We want you to know that you are not alone. You are a survivor. Millions of us have your back.

We call on Senators to demand a full, fair and trauma-informed investigation.

And focus on joining all these amazing women in VOTING this November.

Thank you for reading, and thank you for sharing this post. If you value this blog, please consider supporting it. You can do this by BECOMING A PATRON. Or by LEAVING A TIP. Or just by following me on Facebook and on Twitter. These are sad times. Like Mr. Rogers said, “LOOK FOR THE HELPERS.” I love you people…