If You Don’t Believe Online Conversations Change Anyone’s Mind, Then WHY ARE YOU COMMENTING?!?

My Facebook page is home to some controversial and sometimes contentious subjects of conversation. In addition to my own comment-inducing posts, I have also surrounded my online persona with many people who feel very strongly about things (political, theological, and otherwise), so it’s not at all uncommon for me to comment on other people’s controversial/contentious posts. Inevitably on these posts, there will appear a strange creature: “The Person Who Believes No One Ever Changes Anyone Else’s Mind On The Internet.” This creature feels compelled to inform you (and the other people involved in an online conversation) of the futility of trying to change someone’s mind on the internet… And yet they seem blissfully ignorant to the fact that they’re trying to change your mind about this topic …[wait for it]… ON THE DAMN INTERNET!

This makes about as much sense as being really passionate about believing that “Nobody Can Read Something Written In Invisible Ink!” while trying to convince people of your belief by writing your argument down IN INVISIBLE INK.

I know online interactions can be frustrating, but please stop before you get to this point…

“The Person Who Believes No One Ever Changes Anyone Else’s Mind On The Internet” usually shows up in one of two forms: 1) The Fly By — A random person not involved in the conversation who feels like they need to let people know how fruitless time spent debating online is, and 2) The Secret Agent — A person who has spent significant time trying to change someone else’s mind in an online conversation, who then (usually after their argument has been found lacking) suddenly REVEALS himself to be a true believer PWBNOECAEMOTI. And again, just as a reminder, both of these forms are peddling their beliefs and trying to convince you of something …[wait for it again]… ON THE DAMN INTERNET!

In a lot of ways, discussing things in written form is BETTER than talking about it in person. Of course, there are drawbacks. You can’t interpret TONE as well when you are responding to text… Especially with people who are not very good at writing. Sometimes — especially when things get more emotional and heated — things which were meant to be benign can come across as mean or sarcastic. And it’s easier to forget that you are talking to an actual human being when you aren’t discussing things face-to-face. But there are advantages too. You can read things over before you post them. MANY times I have asked my wife to read a comment I was considering posting, and she talked me out of it… That’s something you can’t do in a face-to-face heated discussion. And when discussing things in person, sometimes people have differing recollections of what was said… In online conversations, you can just go back and READ what was said (unless people start deleting their comments, which is SUPER annoying).

Face-to-face conversations are more temporary and less shareable. I’ll find myself trying to remember something amazing someone said earlier, but the words are gone. But text is different. Sometimes there are tweets or a Facebook statuses that are distilled down to such pure Truth that hundreds of thousands of people recognize it as such, and they SHARE it… Something so true that gives off a sort of self-evidence… Something so true that it ENDS ARGUMENTS. Not every argument has this sort of answer available to it. But SOME do. And this is one of the amazing things about the internet: It has algorithms which allow the cream to rise to the top, and by so doing, it allows more people to witness those bits of distilled truth which other people have spent time working out.

I think many people believe that social media interactions “aren’t real.” For some, there are people who TALK, and people who DO. Which brings us to another creature who sometimes rears its peculiar head: “The Person Who Acts Like Talking About Things Is Worthless.” This related creature is the Very Pious Person who discounts the value of words compared to actions, and feels the need to let you know that THEY are the sort who DOES something about issue instead of just talking about them online. Ugh. As if speaking up isn’t an action… And as if they aren’t talking about it online.

Yes, actions speak louder than words… But this doesn’t mean words make no volume whatsoever, right? I mean, great — You’re going door to door trying to register people to vote, and there’s a good case to be made that this action is more important than talking to people about their need to vote. But just because we need people doing the good work of registering people to vote DOESN’T mean we don’t also need people doing the good work of convincing people it’s worth their time to vote. Or exposing the hypocrisy of one of their voting choices. Or sharing stories showing HOW they should vote if they care about Women’s Rights, or Racism, or Immigrant’s Rights, or Not Having Our Country Be An International Laughing Stock…

This is not to say I believe anyone’s mind can be changed… With some people, it is readily apparent that they are YEARS away from being able to hear the things people are trying to say to them. But even then, there are many times I have dedicated my time to an online conversation — not to change the mind of the lost cause I am directly involved with, but to expose the flaws in their argument to the people who are reading along without commenting. And believe me: There are MANY of them. I can’t tell you how many real life conversations I’ve had with people who talk to me about a discussion or an argument I’ve had online like THEY were right there in the thick of it… But they didn’t comment at all. Not so much as a “Like.” We don’t always stand up to the bully because we think he’s going to change — Sometimes we stand up to the bully because other kids are watching… And we’re trying to show them that bullying is garbage. 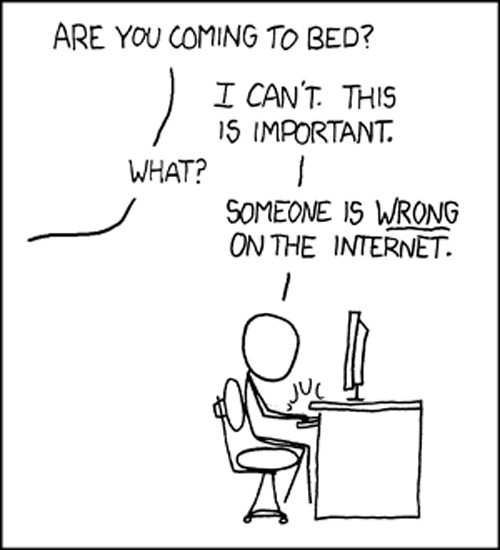 You can’t change everyone’s minds… But if you believe you can’t change ANYONE’S mind, you should probably not be trying to convince other people of that.

I’m not sure why some people are so convinced that online interactions are hollow and ineffectual… But regardless of whether you believe that face-to-face conversations are a better means of communication or not, if you truly believe that social media interactions are worthless, either shut up about it online, or post your cynical comment and publicly acknowledge that you are a hypocrite. Because that is what you are if you are if you are using social media to preach the pointlessness of social media.

This phenomenon is nothing more than Cynicism and Pessimism dressed up as “realism.” What these people are REALLY saying is that no one has ever changed THEIR mind through an internet interaction or an online conversation, and so they can’t imagine the sort of mind who might let another person cause them to reexamine their own firmly-held beliefs. We all get that YOU, PWBNOECAEMOTI, have lost any hope of changing anyone else’s mind… What we DON’T get is why you feel compelled to proselytize your gospel of cynicism to US. Anyone wanting to find a reason to be cynical need only look at the news. We are living in a world where 62 million people actually voted for Donald Trump. We are living in a world where a political contest between a spineless shill like Ted Cruz and an eloquent person of integrity and character like Beto O’Rourke is actually a CLOSE RACE. We are living in a world where this the world’s journalists are forced to act like THIS NATIONAL EMBARRASSMENT isn’t a complete moron. Cynicism sells itself right now. Go sell your hopelessness somewhere else… I’m trying to quit.

Part of the reason I wrote this is because I regularly run into people who are trying to change people’s minds by convincing them that no one ever changes anyone’s mind, and I wanted something I could post the next time I encounter them online. Feel free to use it yourself. Also, if you value the stuff I write, and you want to support it, you can BECOME A PATRON. It’s fun and easy. Or you can LEAVE A TIP ON PAYPAL. That’s easy and sort of fun? Otherwise, just keep in touch on Facebook or on Twitter. Please stay brave, stay strong, and stay hopeful… Meanwhile, here is another GOOD THING TO READ.