Impeachment, For Those Of You Who Might Be A Little Confused

So listen… I realize there are a lot of folks out there who are confused about what is going on right now with this whole impeachment thing. And tonight, while I was attempting to explain the facts behind the impeachment to a man (someone who takes in almost exclusively far-right wing media), I also realized that I have a pretty decent understanding of what is happening. Over the past few weeks, I have spent a whole lot of time watching and listening to the impeachment proceedings. And I figured there might be a few people who read this blog who might appreciate some help in that regard, so here you go… 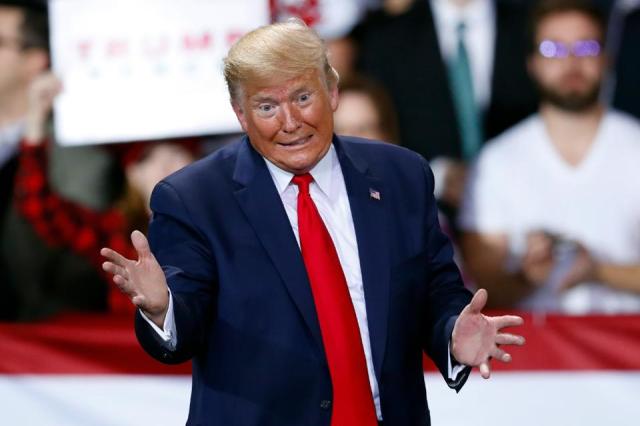 Impeached by the House. Well, at least now he can say he won a popular vote…

Here are the basics: Ukraine is an ally of the United States. In 2014, Russia “annexed” Crimea… Which basically meant that they took it from Ukraine. That marked the first time since WWII that borders changed in Europe in this way, and Russia’s actions got them kicked out of the G8 and started a bunch of economic sanctions. Ukraine applied for membership into NATO (if you attack one NATO country, you attack them all) in 2008, but their country’s endemic corruption has worked to keep them out. Even though they are not a part of NATO, they are a U.S. ally, and we have supported them as they have faced a years long war with their neighbor Russia, who wants more of their territory.

While Obama was in office, Petro Poroshenko (a wealthy, corrupt businessman) was president of Ukraine. We supported Ukraine in their fight against Russia, but President Obama was reluctant to give them the Javelin (tank-busting) missiles you may or may not have heard about during the impeachment hearings. Any U.S. aid was celebrated by Ukrainian leadership, as well as U.S. ambassadors, as being symbolic of the United States standing with Ukraine against Russia. When Trump became president, he provided Ukraine with their congressionally approved aid in 2017 AND 2018, and — as the GOP kept bringing up over and over during the hearings — he also approved the Javelin missiles the Ukrainians had been asking for. Though, what you probably DIDN’T hear about is how Trump gave the missiles with the condition that they be stored on the Western side of Ukraine… Far away from the conflict zone with Russia on the Eastern side of Ukraine. Basically, the Javelins were given with the condition that they not be used against Russia.

In 2019, Ukraine elected Volodymyr Zelensky as president. He ran on an anti-corruption platform, but he was not a politician. He was an actor and comedian who became famous playing a role in which a regular guy becomes president. He was decidedly anti-Russia, and saw Putin “as an enemy.” Another important thing happened in 2019… Joe Biden declared his candidacy for president, and immediately became the democratic frontrunner.

The next part is a more complicated timeline, so I don’t want to dive in so deep that people get lost… but if you are interested in knowing the exact timeline of events, HERE IS A VERY GOOD ONE made by PBS. The bullet points are here:

The facts and the timeline of the case are not really up for debate, despite a total effort by Trump to obstruct the fact-finding mission the House set out on. When asked for documents and testimonies from key players on the President’s staff, the White House refused to turn over ANY documents, and Trump didn’t allow any members of his staff to testify, citing “presidential privilege.”

Conservatives will someday face the horrible truth that the Republican Party fought so hard to justify and excuse an amoral and self-serving president, and what he gave them in return was bigger government and erosion of the principles and values they once claimed to cherish.

Now this brings up something important: The Republican Talking Points attempting to discredit the Impeachment and muddy the waters so their ignorant masses stay confused. Here’s the first one: “What’s the big hurry? When there is a dispute between the Legislative branch and the Executive branch, the Judicial branch settles that dispute.” It’s true that this issue of “executive privilege” is something that could be settled within the courts, but that process is very long, and could easily be drawn out by White House lawyers until LONG AFTER the 2020 election takes place… So because the nature of his crime involved trying to pressure a foreign government to affect our election, it is prudent to settle this BEFORE the next election.

Here are a few more GOP talking points, followed by the reason why they are total BS:

Dems: "The president has shown he is trying to undermine the upcoming election."

Please stop saying it's an outrage that a "duly-elected president" is getting impeached. That's who impeachment is for — a president who was duly elected and then did something wrong.

Please try to imagine that you were accused of committing a crime that you didn’t do, and you had documentation and material witnesses that could testify to your innocence. NOW imagine that when you are asked to turn over that evidence, you refused. Why in the world would someone who didn’t commit a crime refuse to turn over exonerating evidence? If the call was so perfect, let your staff testify…

With one simple move, Trump could wipe out both impeachment articles. By allowing Mulvaney, Pompeo and Bolton to testify, there would be no obstruction of Congress. And presumably, they could disprove abuse of power

So if he's truly innocent, ask yourself why he's not doing that

For regular people, that action of not turning over subpoenaed materials is known as “obstruction of justice.” It is illegal, and it will get you thrown in jail. But for the president, it is only going to get him in trouble if he gets impeached… And, like I mentioned earlier, the SENATE is the jury in an impeachment. But what if you knew that seven out of the 12 jurors would not convict you, no matter how clear it was that you obstructed justice? What motivation would you have to hand over any subpoenaed materials? Especially ones that showed you are guilty…

And this is the situation we find ourselves in as a country right now — The president is very confident that there are no republican senators who will cross party lines and put country over party. He knows that the Senate, who is the jury in the impeachment trial, has 7 out of 12 jurors (or 53 votes) no matter HOW clear the evidence is that Trump is guilty of abuse of power and obstruction of Congress.

In Nixon’s impeachment, when the supreme court ruled that he had to turn over the tapes, he immediately resigned… Because he knew that the evidence was overwhelming that he was involved in illegal actions and abuse of his presidential power. This is the same thing that Donald Trump knows about the documents that surround the plot to pressure Ukraine to start an investigation on his political opponent.

I have no doubt that Donald Trump actually thinks that he “did nothing wrong.” This is the same person who, when asked about things he’s asked forgiveness for, couldn’t come up with one thing for which he felt remorse. He’s a narcissist… He NEVER thinks he’s done anything wrong. Please recall this clip of this “christian” man — the same one who cheated on all three of his wives and bragged about sexual assault — saying he’s never had a reason to ask God for forgiveness…

All he can do is name drop the name of the pastor of a church no one remembers him ever darkening the doors of… Ugh. I swear. Even encountering videos of him speaking makes me feel so gross.

Even Christianity Today sees it clearly enough to risk alienating and enraging their readers. Regardless of what happens, I can’t foresee any GOP Senator who has the character or integrity to do what’s right and tell this corrupt, festering boil on the anus of America to step down. Which is why the House is considering withholding the articles of impeachment from the Senate until they have assurances that they trial will be fair. And when the Senate republicans dishonor their oath to protect and preserve the Constitution of the United States and go AGAINST the rule of law by siding with a corrupt narcissist, this is the message that they will be sending: They will be telling a corrupt, narcissistic man — one who clearly put his own interests over the interest of our nation — that he, in fact, did nothing wrong. They will embolden a man who already believes he is above the law to commit even more crimes at the expense of our nation’s reputation and security. History will forever remember this dishonorable low point in America’s story.

If the dream that was America survives this presidency, that is…

Thank you so much for reading! If you value my work and you’d like to say thank you, help support it, or if you’re just feeling the Christmas spirit, you can LEAVE A TIP ON PAYPAL. Or you can BECOME A PATRON and leave a couple bucks each month. Otherwise, please follow along and add to the conversation on FACEBOOK and on TWITTER. I know people are tired. I’m tired too. Look for things to be hopeful about. Lean on each other. And trust that the moral arc of the universe will bend toward justice… But it will bend a lot sooner if we all pull on it together.

3 Responses to Impeachment, For Those Of You Who Might Be A Little Confused