Why I’ve Decided To Buy A Tiger

An elephant, seen here washing the blood off its legs–the blood of all the innocent children it has murdered.

So I’ve decided to buy a tiger. I know it seems impractical and more than a little dangerous, but we live in an impractical and dangerous world. It’s not the carefree world that I grew up in—I live in a city with a zoo now. And if you’ve been watching the news at all during the past ten years, you know that there have been many, MANY accounts of people being trampled by elephants. Elephants seem like this big, gentle animal, but if you piss off an elephant…. Man, WATCH OUT!!! Those wrinkly, big-eared bastards will just as soon trample you as look at you with their giant, soulless eyes. I know that the chance of getting trampled by one of these tusked demons is very slim, but I only live about five miles from our local zoo. And there are THREE of them in there. Imagine—JUST IMAGINE if these pernicious pachyderms broke free, rampaging down the street, and made their way to my house!!! I mean, it’s not just me that I need to worry about…. I have a family now—a wife and three kids. I need to protect my family. Which is why I’m getting a tiger—one of the few animals that can fend off a pissed off elephant. 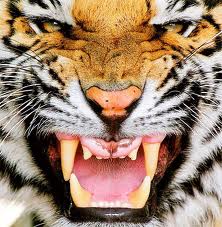 I though about keeping its teeth stored in a safe spot, but what good is a toothless tiger when an elephant kicks down your door?!?!

Now, I know what you are thinking: A tiger can be a pretty dangerous thing…. I am aware of that. But I have taken a Tiger Safety course, and I plan on keeping the tiger where my kids will hopefully not be able to get their hands on it. And yes, I’m aware of all the research showing that in houses with tigers, people are almost five times more likely to be mauled or killed by a wild animal, but those statistics are dealing with STUPID people–not people like me. Anyway, it’s my constitutional right to be able to protect myself, my family, and my home with a tiger. I’m aware that when the founding fathers wrote it, they intended tiger ownership for people who were part of a well-regulated circus, but THIS IS ABOUT FREEDOM VERSUS TYRANNY!!! You can take away my tiger when you pry it from my cold, dead hands.

These demons can run faster and jump higher because their ancestors had to be able to that stuff  back in Africa….

Another benefit of having a tiger is that tigers are a great defense against other peoples’ big cats. There have been some people moving into our neighborhood that I just don’t trust for whatever reason…. People walking around who just seem like they are up to no good–People walking around with BLACK PANTHERS. And you know that’s never good for home prices. I mean, at least I follow the law with my tiger–unlike some people. People who ruin it for law-abiding tiger owners like me. Sure, there have been a few tigers that have gotten out and killed some people recently, but most of those people who let their tigers escape are just crazy. Also, most of those stories have been made up to try to take our tigers!!! We don’t need more tiger regulations–We need better mental health for people. And we need a list of all the crazy people, so we know who can handle the responsibility of tiger ownership. I mean, if we outlaw tigers, only outlaws will have tigers…. And then where will we be?

Our forefathers fought and died so my wife can carry a loaded cobra into a bar while she’s drinking!

So, as you can see, there are all kinds of great reasons for me to have a tiger to protect my home from a crazy, evil elephant trying to break down my door and stomp me and my family. But what happens if I’m not around and there is an elephant stampede while my wife is at the mall, or at a movie, or while my kids are at school? THEN how will we stay safe? Luckily, I have done some research and found another animal that those God-awful, grey behemoths are afraid of: Cobras. I am purchasing a cobra for my wife to carry with her in her purse. I know, I know, “Lethal assaults were 2.7 times more likely to occur if a cobra was present, suggesting that the idea of cobras being used for protection is evidently mostly a myth.” I am also working on passing legislation that will allow teacher to have cobras in their classrooms. There are no statistics about how much less safe this will make our classrooms, because until now, this idea has seemed completely insane to most rational people, but I think that now might just be the time for cobras in the classroom. Can’t we please just think of the children?!?!

In closing, I’d like to remind everyone to support the NTA (National Tiger Association), as well as to remain vigilant against the forces out there who are spreading the lies that less tigers might mean less tiger maulings. It’s all a bunch of lies…. As we all know “Tigers don’t kill people–PEOPLE kill people…. many times with tigers.”

This entry was posted in Uncategorized and tagged A cobra in a purse, dead hands, Gun Control, Satire, Self Defense, Tigers don't kill people--people kill people, Why I've Decided to Buy a Tiger. Bookmark the permalink.

9 Responses to Why I’ve Decided To Buy A Tiger