An Open Letter To Christians About Gay Boy Scouts

To Whom It May Concern (but I’m especially looking at you, Southern Baptists): 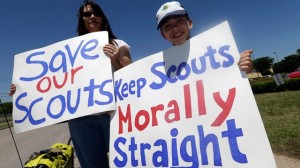 There’s nothing straighter than those sashes with those colorful little ties and badges….

I’m sure you’ve already heard that the Boy Scouts of America have recently voted to allow kids who are openly gay into scouting. I realize a lot of people are kind of freaking out about this news–People like Bryan Fischer of the “American Family Association” who tweeted things like “BSA now stands for Boy Sodomizers of America, because that’s what will happen. Mark my words.” and “Jesus to BSA: ‘It would be better…if a millstone were hung around his neck and he were cast into the sea.’ Luke 17:2.” Now I’m hearing that a bunch of churches are planning on telling Boy Scout troops that they are no longer allowed to meet on church grounds because of the decision to accept gay scouts as if they were regular kids. I don’t know if I can explain how bad of an idea this is.

Before I get into that, a bit about myself: I was never a Scout, but I was a Cadet (the Christian Reformed Church’s version of Boy Scouts). It was probably a lot like Boy Scouts…. We stuck to very non-gay activities like pooping in the woods, washing ourselves in the river with Ivory Soap, and checking each other for ticks with flashlights in tents. As fun as all this was, at some point it became a little stale. I fell in love with basketball. It just seemed manlier–with the showering together, the smacks on the backside, the balls in your hands…. What a terrific sport. It taught me a lot about life. 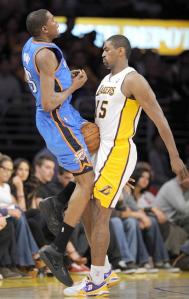 Nothing gay about this….

So listen up, congregations who are actively fighting against equal rights for people who are LGBT–Sometimes in basketball games, there is this strange time near the end of the game where the outcome of the game has already been decided, but there is still some time on the clock. If the game is close, and your team is a behind, sometimes the team who is trailing will repeatedly foul the other team in the hopes they miss some free throws. At least the clock is stopped, and maybe the trailing team can hit some threes…. It’s usually a long shot, but sometimes that’s the only option. But then there are those strange times–Those times when the score is so far out of reach that no amount of fouling is going to allow you to catch the team who is winning–Where the coach calls a time out, he puts in the subs, and tells his players who are still on the court, “Just don’t foul.” 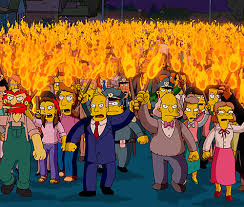 The crowd is getting angry.

If it’s not already clear, in this analogy you are the team that has already been beaten. You’ve been fighting for Rejection and Disapproval and Judgment to be the Church’s official policy toward our gay brothers and sisters, but even though there’s some time left on the clock, the game has been decided. There are still some battles to be fought–Battles for equal rights and protections, and battles against discrimination–But believe me when I say this: “The game has been decided, and victory is out of reach for you.” And with every foul you commit, the crowd groans at the prolonging of an inevitable outcome. And what’s worse is that the crowd is turning on you. Even the people sitting in your section of the bleachers are getting upset, and many of them are heading for the doors. Many have already left.

And the worst part is that the policy for which you fought never really made sense in the first place. For example, with this current fight, you are trying to keep gay boys out of a program that builds character and responsibility and encourages young men to become better citizens…. HOW DOES THIS MAKE SENSE?!?! If you really believe that becoming a Christian cures a person of gayness, then what are you worried about? Think this through: In your world, if someone is gay, then they aren’t saved, right? And you believe it’s your job to introduce unsaved people to Jesus in order to get them saved, correct? I mean, you couldn’t possibly believe people have to clean up their act BEFORE accepting Jesus…. So how in the world are all these unsaved gay people ever going to be introduced to Jesus if you don’t let them in your clubs or make them feel welcome in your communities? It’s starting to feel like maybe you don’t want LGBT people meeting your Jesus. Or maybe you’re afraid that they will meet Jesus, love him every bit as much as you do, and they won’t suddenly be magically attracted to people of the opposite gender. Then you’d be forced into a position of either believing they really don’t love Jesus, or that their same-sex orientation (unlike the decision to follow Jesus) is NOT something a person chooses any more than you “chose” to be straight. And I realize that’s a tough place to be–especially when all you’ve ever been told is that being gay people are going to hell–but I came through it alright…. You will too. To repent literally means “to change your mind.” It’s time for the Church to repent. 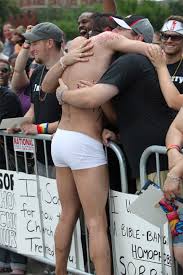 Members of a Church at a gay pride parade, apologizing on behalf of Christians.

So, here’s what I want you to do. First) I want you to say you’re sorry. Every stinking time that people are trying to make the LGBT members of our community feel like second class citizens, the Church is behind it. We’ve got a lot to apologize for…. And even if you don’t feel like your particular Church is guilty, just go ahead and say you’re sorry anyway. Second) Even if deep down you believe that being gay is a probably a sinful choice, I want you to keep it to yourself, and I want you to treat every man, woman, and child who is gay, lesbian, bisexual, or transgender exactly the same as you would treat anyone else in your life. If you are right, and if being a follower of Jesus means gay people turning straight, it is neither your judgment nor your exclusion that is going to do it–It is going to be a deep relationship with Jesus Christ. And Third) I want you to find a person (at least one person–maybe even more than one) who is LGBT, and I want you to become that person’s friend. Really get to know him or her. Listen to his story. Find out what she believes. Learn about their families, and what it was like coming out. Attempt to love a person free from any judgment, and pretend like it’s not your job to convict someone of their sin…. Because it’s not.

But above all, please stop fouling! The game is over. I hate to be the one to tell you this, but you lost. Please, just let the clock run out so we can get to the part where we all shake hands and say, “Good game.”

Post Script: It should be noted that the team the Church has been fighting against is not the LGBT community. Just like in the fight for civil rights for women and for minorities, the Church has been battling another part of itself, hand in hand with populations who are experiencing injustice. There is a part of the Church that fears change–whether that change is racial diversity, female preachers, or welcoming people who are LGBT to the table. And any strategy of hatred against people who fear change or people who “don’t get it yet” will be every bit as ineffective as a strategy of hatred against gay Boy Scouts. For it is His lovingkindness that draws us to repentance.