The Reason To Stay Friends With Trump Fans

Lately, I’ve been seeing a lot of the following: “If you support ________, please go ahead and unfriend me right now.” There are a lot of different issues/topics that I have seen inserted into that space over the past few years. For the purposes of this post, I will be speaking to the sort of people who might feel compelled to complete that statement with the word “Trump.” Conversely, if you are a person who might fill that space with the words “letting Muslims into this country,” you’re probably not going to like what I’m going to say. Or really, what I’ve ever had to say (Feel free to voice your angry opposition in the comments sections–Your patriotic rage mixed with misguided religious fervor is a vivid reminder to the rest of us why talking about this stuff is so very important). 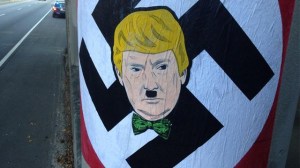 If this picture makes you more likely to vote for Trump, chances are you’re not going to enjoy this article.

A couple years ago, right around this same time of year, the whole country lost its head–very similarly to what is happening with Donald Trump right now–except two years ago, the issue that divided us was the Duck Dynasty guy making comments about homosexuality. After writing about that issue, I wrote a post titled “Starting An Argument On Christmas For All The Right Reasons” (if you haven’t read it, you should. I think it has a lot to say about finding hope in a climate of division and anger–especially at Christmas. But then again, I’ve always been a fan of what The Boeskool writes). If you don’t read it, it basically talked about how, when faced with all this crazy, “staying out of it” seems like the reaction of sane people. But if the only ones involved in the conversation are the crazy people, it starts to look like everyone is crazy… And then people start to lose hope. And that is not okay.

Two days ago, I wrote about how Christianity is not in a battle with Islam, but instead there is an Ideological struggle (or jihad) happening WITHIN the Church about what we believe God is actually like. And I know that many people dismiss Facebook et al. as “meaningless,” but–like it or not–one of the main places the battles for the hearts and minds of the people is taking place is on social media. And dealing with people online who are at drastically different stages of consciousness can be a maddening experience. This is why you have probably seen someone invite all their friends who think [fill in the blank] to unfriend them… It’s a fairly common reaction to the frustration of dealing with people who seem incapable of seeing things your way. 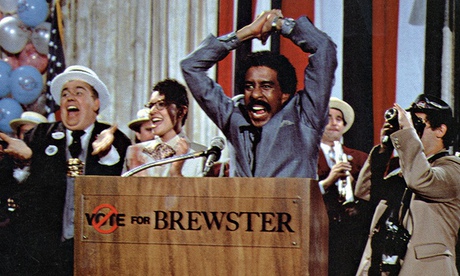 The Trump Campaign is starting to look eerily similar to the plot of “Brewster’s Millions.” Only with way more racism.

Yesterday, I was even introduced to FriendsWhoLikeTrump.com as a way of finding out which of your friends actually like this guy (Though, don’t use the results as a definitive judgment of someone’s lack of moral character. Some of those people might just be keeping an eye out for the awful things he says… Like birdwatchers, only instead of watching birds, they are on the lookout for Crazy. Also, some of those people might just be old school Apprentice fans). Anyway, I think that there are a whole lot of better choices than simply severing social media relationships with people who are either ignorant, deceived, or just plain bonkers enough to be rooting for Human Internet Comments Section known as Donald Trump. 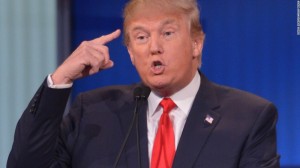 Here we see Mr. Trump pointing at the most expensive part of his outfit.

Now, I just used the word “Crazy” (as well as the word “Bonkers,” which is quickly becoming one of my favorite words) in that last paragraph. And while there are certainly more than a few crazy people out there, not everyone who is a Trump Fan (TF, for short) is a TF because they are crazy. Sometimes we use words to describe people that work to dehumanize them… But make no mistake, these people are human beings–made in the image of God–and worthy of the same love and respect that every one of us is worthy of. What sometimes looks like “craziness” is just plain old fear. If you’re having trouble treating people like human beings, just view them through the lens of understanding that people who are afraid are often the worst versions of themselves. 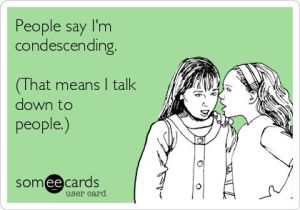 And I’m aware that this is probably coming off as being condescending (especially if you are a TF and have made it this far into what I’m writing), but that’s just the way it is. Enlightenment is not a value thing. There are plenty of people who are way more enlightened than I am… That doesn’t make me worth any less than them. Every stage we go through is necessary to bring us to the next place of deeper understanding of how to truly love each other. Puberty is not the fullness of the human condition, but it has as much value as any other stage, because without going through it, we couldn’t be who we are meant to be. 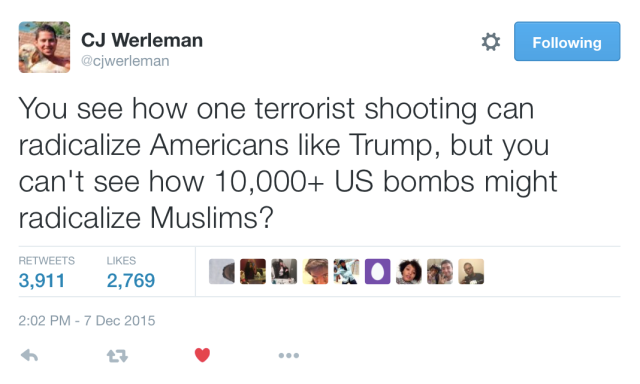 And as hard as it is to believe, not everyone is capable of seeing this double standard… It takes a certain degree of enlightenment and empathy to even have a chance at getting to the truth in that tweet. But it is the responsibility of the ones with a greater degree on enlightenment to stop that cycle of violence. Because if we pull out–out of frustration or futility or even our own fear–the people drinking that toxic cocktail will find each other, and they will whip themselves into a frenzy. And that frenzy has very real consequences. Below is the face of a Muslim store owner in Queens named Sarker Haque. 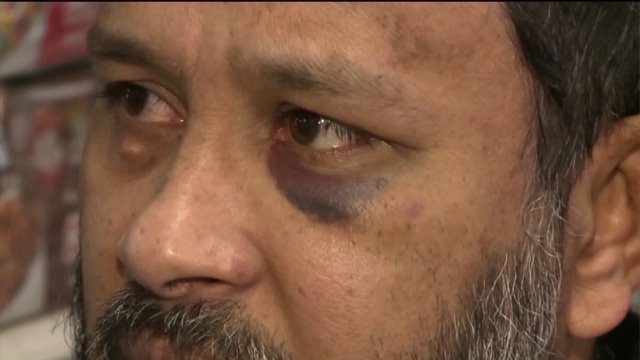 “It doesn’t matter what color or nationality you are. We are in America. Everybody came from somewhere.” ~ Sarker Haque

He was beaten yesterday by a man who said he wanted to “kill Muslims.” If we–the ones who see this stuff for what it is–stay out of it, these sorts of events will get more and more frequent.

So listen–If you are one of those people who has left this fear-based theology behind, you have a responsibility to respond lovingly to those folks who are stuck in this cycle of fear, anger, prejudice, hatred, and violence. And “responding lovingly” does not mean severing relationships (though I realize that sometimes it is necessary for your own mental health and safety… Kind of a “put on your own oxygen mask before putting on your child’s” sort of situation). Responding lovingly also does not mean leaving people to wallow in online echo chambers where people fuel the fires of each others’ fear, anger, prejudice, and hatred… until violence is the inevitable byproduct. 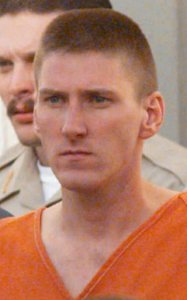 And when we stay silent in the face of overt bigotry and hatred, there are real consequences for that as well. So yeah… there are a lot of people out there stuck in a cycle of violence who can’t see any way out. There are tons of ignorant people who post stuff online that is 100% factually untrue. There are people, angry about corruption and injustice, who are actually stockpiling weapons for a military conflict with the government. And about 30% of the republican party right now thinks that a racist, sexist, bigoted, fascist megalomaniac is the best person for the White House. But here is something that is true: These people need as many sane people in their lives as possible. Especially when “sanity” starts looking like breaking the cycle of violence with calmness, rationality, and most importantly, LOVE.

So please–if you’re able to–don’t throw the TF’s out of your life. They NEED you in their lives. When our disgust at the things ignorant people say outweighs our compassion for the ignorant people saying them, we have failed. You’re not going to be able to be purely loving every time–sarcasm and annoyance and impatience will rear their ugly heads from time to time (Lord knows they do in my life). But hopefully, if enough of us start actually behaving like we are better than this, maybe some other folks will come to their senses… they will wake up… and they will think, “You know what? I’m starting to think that I’m better than this as well.”

8 Responses to The Reason To Stay Friends With Trump Fans