What The Muslims Taught Me About Jesus

Two days ago, someone vandalized The Islamic Center of Murfreesboro… A Mosque in a town not far from where I live in Nashville, Tennessee. They spray painted the words “Fuck Allah” multiple places, spelled out those same words in bacon, and then covered the door handles in bacon as well. This is not the first time people have vandalized this Mosque and terrorized the people who worship there. Seven years ago, they were the victim of anti-Islamic graffiti, a bomb threat, and arson. While they were trying to build, members of the Murfreesboro community tried to sue to keep them from building the center, and the plaintiff’s lawyer argued that Islam isn’t a real religion, so they couldn’t used religiously zoned land “because these are the same people who flew jets into the World Trade Center on 9/11.” Not exactly “welcoming.” But because of yet another act of violence and hatred, yesterday they had a gathering where members of the community could express their solidarity. And since it’s only about half an hour away, I thought I’d go stand with the folks saying, “We are not okay with this.”

I had never been to the Islamic Center of Murfreesboro before, so I let my phone give me directions… But even with Siri talking to me, I almost missed my turn. I was too busy looking at a Church with a ridiculous amount of big white crosses out front. There is a Church RIGHT NEXT DOOR to the ICM called “Grace Baptist Church.” And their property is covered with just under 40 large crosses. Here is a pic I got from Google Maps: 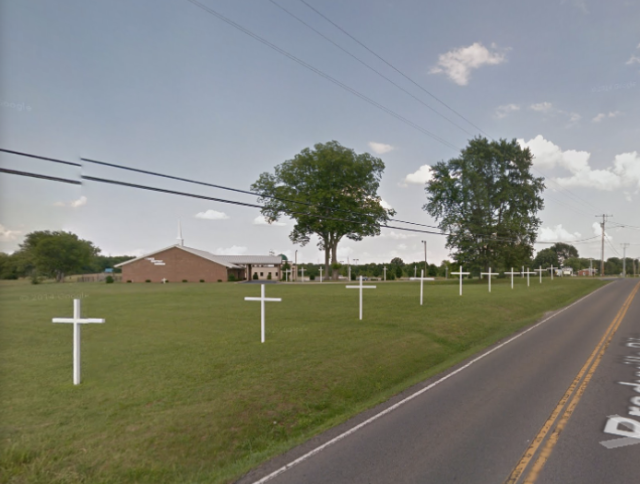 Wouldn’t it would be weird if churches decorated their lawns with electric chairs or guillotines?

It certainly doesn’t look like the spot where you are getting ready to turn into a Mosque’s parking lot… But then again, it doesn’t look like your average front yard of a Baptist Church, either. But back to that in a moment…

The gathering was beautiful. There were different leaders from different faith communities who spoke out against the acts of violence and hatred, and everyone was encouraged by the big turnout of people willing to spend their evening showing their solidarity and love for their neighbor. It felt like this sweet, heavenly break from the “Us vs. Them” mentality that makes people call out for walls instead of bridges. I loved it.

After it was finished, I went and briefly talked to Saleh Sbenaty (who is on the board of ICM, and was also the spokesperson for the event), and I asked him this question: “What is your relationship like with the church next door?” He immediately looked disheartened. He said, “Didn’t you notice the 39 crosses as you drove in?” I had just told a friend that I bet those crosses weren’t there before the Muslims moved into the neighborhood. Churches will have ONE big cross… Sometimes THREE big crosses… Almost NEVER will there be 39 big crosses lining the property. I looked into the history of those crosses. Turns out it started as thirteen crosses. Then ten more were added. Now there are 39. The church voted to do it “to make a statement to the Muslims about how we felt about our religion, our Christianity… We wanted them to see the crosses and know how we felt about things.”

Saleh told me that the Mosque has reached out over and over to their Christian neighbor, but they had no interest in getting to know them. He mentioned that when the crosses were being made for the church, they ran short on resources… The Mosque offered to pay for the lumber they needed. The Church refused.

This makes me proud to be an American.

Now, please don’t let this sound like I’m “Christian bashing.” There were ALL KINDS of Christians at the gathering. I’m not Baptist bashing either. There were people from other Baptist congregations in attendance as well. I don’t even want this to sound like I’m bashing the Church who put up all those crosses… Like a bunch of white middle fingers. There are probably all kinds of sweet, kind folks who attend that church… People with worries and fears and stresses and kids who love them just like the rest of us. I’m not trying to dehumanize the people who go to Grace Baptist church. They are certainly human, and worthy of being loved… Just like the rest of us. Here’s what I AM saying: They are getting it wrong.

It’s almost parable-level of self evidence, right? Like I can see a story about some lawyer asking Jesus “What must I do to inherit eternal life/Who is my neighbor?” and Jesus telling him a story about two places of worship… One who didn’t offer to help when people desecrated their neighbor’s Mosque, and another who offered to buy some lumber for even more middle-finger-crosses to be pounded into the ground to make even more of a “statement to the Muslims about how we felt about our religion, our Christianity.” One of these things is like Jesus, and one of them isn’t. “WHICH ONE WAS A NEIGHBOR TO THE OTHER?” Jesus asked. And yet there are SO MANY churches today can’t seem to get this simple parable. This is the offensive genius of the Parable of the Good Samaritan… Sometimes the one you think is getting all the theology wrong is actually the one God is using to teach you how to love… teaching you that the cross is not a middle finger.

So this actually isn’t a story to beat up on the sort of religious communities who preach that America is God’s favorite, and have people who wear things like this to church…

Pulled this from GBC’s Facebook page. I can almost guarantee you that these guys are nice. They’re completely wrong… about those outfits AND about their theology… But they are almost certainly nice guys.

This is actually a story about hope. It is a story about a boy scout troop who got together with some members of the Baha’i faith last night and started scrubbing some walls… like little Holden Caulfields, scrubbing the “Fuck Yous” off the bathroom doors of the world.

It’s a story of hundreds of people–people of differing faiths standing along side people of no faith at all–gathering together around a goodness that transcends the borders of nations, as well as the borders of theology. It’s the story of people trying to convince each other that everything is not garbage… People standing with their neighbors and reminding them that the darkness is no match for the light… People standing together, professing with their lives and agreeing with the truth that, when it comes to loving your neighbor, it is way more powerful… more life-giving… more Christ-like… and more loving to DO the right thing than it is to “believe” the right thing.

Admit it… You like this blog. And you’re probably thinking, “I wish I could help support this dude.” Well, good news–YOU CAN! You can Be A Patron, or you can Give On Paypal, or you can just share this post with the people in your life. Yada yada, Facebook and Twitter… I sure am honored you are reading my stuff. Thank you!

12 Responses to What The Muslims Taught Me About Jesus