No. The CDC Did Not Just “Admit That Only 6%” Actually Died From COVID. You Moron.

Yes, I realize that title might seem a bit harsh… But the majority of the people who need to read this the most are folks who don’t read past the titles of things, and I wanted to make sure they got the gist.

This morning — before I even got out of bed — I was unfriended & blocked by a woman I went to high school with. It seems she didn’t like it when I informed her that the ridiculous meme she shared was false: It said…

“This week the CDC quietly updated the Covid number to admit that only 6% of all of the 153,504 deaths recorded actually died of Covid.

The other 94% had 2-3 other serious illnesses & the overwhelming majority were of very advanced age.”

If you have any anti-maskers or QAnon cultists in your feed, chances are pretty good you saw it at some point in the last 24 hours. Some versions added the words “90% were in nursing homes,” which is completely untrue (in the U.S., 9% of cases were LINKED to nursing homes, and 41% of deaths… Though, as more people die, that percentage is going down). Some shared a link to THIS PAGE of the CDC’s website, where they can read that “For 6% of the deaths, COVID-19 was the only cause mentioned. For deaths with conditions or causes in addition to COVID-19, on average, there were 2.6 additional conditions or causes per death.” And then morons & trump supporters everywhere (I’m aware of the redundancy) post the meme with CAPTIONS LIKE, “Well, we were duped. It’s time for the mask brigade to stop with the fear mongering, and let’s get the kids back in school 5 days a week. The hoax is over.”

Before I explain why this meme is total horse crap, I’d like to point out a few quick things: 1) I don’t know when or where this meme originated, but the actual number of U.S. reported deaths right now due to COVID-19 is over 185,000 (it’s actually way higher than that, but we’ll get to that shortly). 2) The section this information is under is titled “Comorbidities.” The CDC has been reporting on this all along, so it’s a lie to say that they “quietly updated” this information, as if this is something new. It’s not. It’s just something most people haven’t been paying attention to. And 3) When they say “of very advanced age,” they are talking about how this virus disproportionally kills the elderly. Once again, it is SUPER gross to diminish the seriousness of this disease based on the fact that the virus is more deadly to old folks… As if they are more expendable. I hope older folks remember these dismissals when it comes time to vote.

Wow. I hope none of the people who were buried in a mass grave on Hart Island in New York City were YOUNG FOLKS, amirite?? Now THAT would be a tragedy…

So… About the meme. In order to understand why it is such dishonest garbage, first you need to understand what “comorbidities” are. A comorbidity is basically having more than one chronic diseases or conditions at the same time. Research has shown that 60% of Americans have at least one chronic condition, and 42% have more than one. That’s a lot. Some common comorbidities include: Hypertension (high blood pressure), Asthma, Diabetes, High Cholesterol, Kidney Disease, Pulmonary Disease, Obesity, Substance Abuse, Depression, Anxiety, Cardiovascular Disease, Smoking, Pneumonia, and MANY others. And as people get older, their chances of having more comorbidities goes up. So when it says that “for 6%, COVID-19 was the only cause mentioned,” it means the doctor didn’t list any other chronic disease or condition in the Cause Of Death. If a person gets COVID-19, gets pneumonia as a result, goes on a ventilator and ends up dying, that person might have both COVID and pneumonia listed on their death certificate. If a person dies from a blood clot or stroke (as COVID has a history of causing), they’re going to have both COVID and stroke listed. Everything is connected.

It should be obvious that the more comorbidities a person has, the more dangerous this disease is to them. It attacks systems. And when you think about the fact that 6 out of every 10 Americans have at least one chronic condition, and that this disease is far more deadly the older a person is, it actually says a lot about how deadly this virus can be — even to some folks who are perfectly healthy. A full 6% of people this disease killed had no other listed comorbidity which caused their death. This does NOT mean that COVID actually “only” killed 6% of the 188,000 or so Americans whose deaths are COVID-linked. In actuality, it has killed so many more than the 188,000 that have been reported.

If you clicked on the link to the CDC information above, you will notice right away that the information is not very easily accessible to the common person. I’m the kind of dork who looks at that sort of stuff in my free time for fun, and it’s difficult for *me* to figure out. Luckily, we have medical professionals and journalists to help us make sense of it all… And the experts say that the thing we should be looking at is not just “reported deaths” (and certainly not random, un-cited memes posted on Facebook by some dip shit you went to high school with). We need to be looking at the total EXCESS DEATHS.

Regarding the Only 6% nonsense, it is indeed valuable to have more than one way to count deaths, which is why CDC also look at total “excess deaths” above a normal year, to double check: ~214,000 excess American deaths in 2020 so far. COVID-19. https://t.co/S29HRcP2AV pic.twitter.com/95l7ZFIBH6

Let’s say you own a milk farm. And because you have been keeping track, you can predict that every month, you and your 100 cows can expect about 100,000 gallons of milk. If — in March through August — your cows are only putting out about 70,000 gallons a month, you know you’ve got a problem. Or if you have 10,000 free range chickens laying eggs, and you can predict that each month usually about 300 or so chicken will die, and then — in March through August — you’re losing about 1000 chickens every month, you know SOMETHING IS UP. Maybe there is a hole in the fence and a fox is getting in… Maybe that asshole Jedediah is stealing your chickens again… Maybe there is a virus. 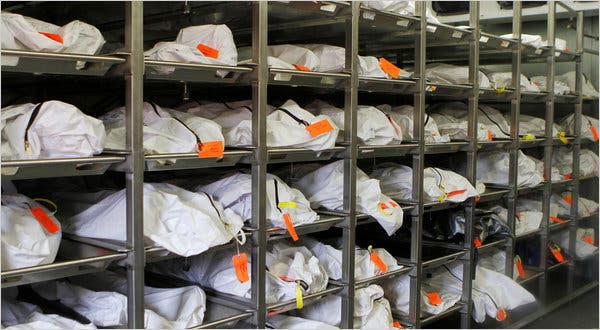 It always amazes me that people are skeptical of doctors & scientists & even actual pictures of piles of dead people… But they will see a meme posted by some dimwit with picture of a bald eagle carrying an AR15 & a cross as her profile pic, and they will take it as the gospel truth.

The CDC has a link to Excess Deaths as well, but once again, it is very difficult for laypeople to decipher… And I believe this is by design. They could put the information out in an easy-to-understand graph or graphic. But they don’t. Again, luckily we have experts and journalists whose job it is to help us understand what’s going on. One of those people is the New York Times’ Denise Lu, who wrote THIS IMPORTANT ARTICLE. In it, she shows graphs which detail the staggering number of EXCESS DEATHS the United States has seen since the start of this pandemic, and shows proof that we passed 200,000 COVID deaths a while ago. The true number who have died is closer to a QUARTER OF A MILLION PEOPLE. The NYT analyzed the information given by the CDC, and figured out that the number who have died is actually “about 60,000 higher than the number of deaths that have been directly linked to the coronavirus.“

Now, at some point, someone from the medical community (who actually knows what they are talking about) will make a video or a status or an article that a whole bunch of people will share, and it will explain exactly why this viral meme is total garbage… But it will have nowhere near the reach of the of this stupid meme & the armies of idiots who pass it along. The explanation will be “too long.” Or it will be too triggering to their need for confirmation bias. Or they will just chalk it up to some “conspiracy” that everyone is in on. Like Mark Twain said, “A lie can travel half way around the world while the truth is putting on its shoes.” And you want to know the hell of it?? MARK TWAIN DIDN’T EVEN SAY THAT!!!

The trump administration is desperately trying to push the narrative that it’s not really as bad as they say it is. Because when you look at our country’s response to COVID-19 compared to the rest of the developed world (other than Brazil, who has their own trump-ish moron to deal with), you have no other option than to put the blame for our nation’s incompetent, profoundly stupid response to this pandemic where it belongs: On trump’s incompetent, profoundly stupid shoulders. This corrupt, dishonest republican administration is trying to paint the picture that it is not as bad as it seems… In reality, it is SO MUCH WORSE. I get that people are exhausted, and they want this to be over. Believe me, I do too. I am still out of work, and things are getting way scarier for many of us since the unemployment stimulus ended. We all want things to get back to normal… but the ONLY way to “get back to normal” is to take this seriously. And the only way for us to take this seriously is to vote this jackass out of office.

Please, PLEASE check things out before you repost them. Our country is teetering on the edge of fascism, and it is no time to pass along false information. And if you see someone posting stuff that isn’t true, please be brave enough to let them know. Even if you’re pretty sure you won’t change the person’s mind who posted it… There are other people watching along at home.

Thank you so much for reading. If you’d like to help an out-of-work writer pay a bit or two, you can BECOME A PATRON. If you’d like to leave a tip for me taking the time to explain why that meme is dumb (so you didn’t have to), you can LEAVE A TIP ON PAYPAL or Venmo your generosity to “chris-boeskool.” Otherwise, please follow me ON FACEBOOK and ON TWITTER for more good fun.

4 Responses to No. The CDC Did Not Just “Admit That Only 6%” Actually Died From COVID. You Moron.