Finding A Middle Ground On Abortion

Posted on October 1, 2012 by theboeskool

Before I begin, I’d like to ask you for 2 things–First Thing: Please forgive me. I just want to start right out by asking for your forgiveness if anything I say here comes across as hurtful or offensive–I promise it is not my intent (this time, at least) to be either of those things. The issue of abortion is one of the most divisive issues that there is, and people on both sides of the debate are so emotionally charged that it becomes to scary to even talk about. I am certain that something I am going to write here is going to offend people on both sides of this issue, but I am not taking this lightly. Here’s the Second Thing: Please allow me to speak into this situation, even though I’m a man. I’m not saying this jokingly. If I am this tired of men controlling the conversations about women’s health issues, I can just imagine how tiring it has to be for a woman. That being said, please hear me out, and if I don’t add anything of value to the conversation, feel free to leave this in the same pile as you left the term “legitimate rape.” 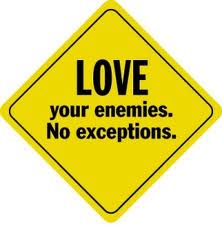 Can’t I just love the enemies who agree with me?

People get very emotional when discussing politics. People also get very emotional when discussing religion…. And I can’t think of any other issue that is so firmly fixed at the crosshairs of these two emotional subjects as the issue of abortion. For many people on both sides of the issue, their beliefs about abortion are so important to them that it overpowers any other matter of contention, and it (almost exclusively) dictates how they will vote in an election. I am not one of those people. And I am not writing this in order to change anyone’s view on the rightness or wrongness of abortion–I doubt even the most eloquently written blog with the funniest photo captions could hope to do that. When I told people that I was writing a blog on abortion, most people’s first question (after an initial “Uh oh.”) was, “Which side are you on?” Well, I’m not taking sides. I’m on the side of civil discourse. I’m on the side of loving your enemy. I’m on the side of being able to talk to someone with whom you completely disagree, and I am writing this post about the conversation. 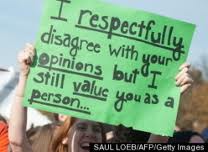 This is so much less flashy than “YOU’RE GOING TO BURN IN HELL,” but it’s so much nicer.

We live in a world that attempts to sway the thoughts of the people in the middle, NOT through civil discourse or rational and respectful conversation, but through the strategy of having the people at the extremes make as much noise as possible. On issues that are very polarizing, it seems that the plan has become adopting such a extreme view that it pulls the perception of “the middle ground” toward their ideological end of the political spectrum. Unfortunately this often works…. but the process leaves those of us in the middle (who see the shades of gray in other people’s black and white worlds) feeling disillusioned, and even hopeless that anything like common ground or consensus or even community can come from yet another conversation. And we are left with one side loudly arguing with the other side while the rest of the people quietly slip away into the other room and discuss Christina leaving The Voice…. attempting to avoid adding to an aparently fruitless noise.

But we have to be able to come to a place where we can talk to each other–even (or especially) about something as divisive as abortion. I believe that something the world needs now more than ever is CIVIL DISCOURSE. We are so divided, but I believe we can do it. Here are some things to remember when talking to someone about abortion–They are easily remembered using the acronym AAAAA (I’ve never been very good with acronyms):

I went into college as sure as a person could be that “life began at conception,” and therefore, abortion was murder. In a Biological Ethics class, we discussed this, and we were asked the question, “When is someone declared dead?” The answer is: When they have no pulse and no brainwaves. Turns out there is a time after conception that a fetus has no heartbeat or brainwaves…. Is it murder to abort a fetus that has no pulse or brainwaves? I don’t know. And even if my morality or my belief in God convicted me that it was, can and should I demand that a person without my same beliefs be bound my my convictions? Especially when medically, they might have competing conclusions…. And if personhood begins at conception (or two weeks before), is there an investigation into a lost child during pregnancy (somewhere between 10-25% of pregnancies end in miscarriage, or what doctors call Spontaneous Abortions)? As many as 50% of pregnancies for women 45 and older end in miscarriage…. Should we allow women that age to get pregnant when half of their babies are dying? There are a lot of questions, and the answers are not as simple as some people think.

And while your at it, keep your penance off of my…. You know what? Let’s just try to remember that not everyone believes the same things you do.

When people are overly simplistic with complex issues, feelings end up getting hurt–Especially when you realize that you never really know who you’re talking to. Someone walks up being very secure and vocal about their case for a woman’s right to choose…. But what they don’t realize is that the person they are talking to has been trying for years to have a child and can’t, or maybe she has had multiple miscarriages, and the thought of a person ending a pregnancy (when a pregnancy is what they want more than anything else in the world) seems as selfish as something can be. Someone else walks up being very secure and vocal about how abortion is murder…. But what they don’t realize is that they are talking to a person who was forced to make a decision between two very shitty choices–That some guy forced himself on her, she decided to end the pregnancy, and then a teenager was forced to walk through a gauntlet of judgmental people who claimed to represent Jesus as they shouted hate-filled things that echo in her ears to this day. 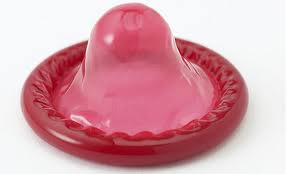 So I have to wrap this up (another way to prevent abortions, by the way). I’m sure that most people who identify themselves as Pro-Life probably read this and think I’m Pro-Choice, just like the Pro-Choice people probably read this and think I’m Pro-Life, but I don’t really care what category people put me in. Sometimes life leaves us in a position where there is no good choice, and how dare you judge someone who had to live through one of those sorts of situations? I also believe that there are actual things worth talking about surrounding our abortion laws. For example, the “point of viability” for a fetus might be different 40 years after Roe v. Wade than it was in 1973, and I think that issue can be discussed without taking away a woman’s right to privacy and choice. In those same 40 years there have been around 50 million abortions, and I think we can all agree that that number is way too high. What if the Church started to model such love to the world that more girls facing an unplanned pregnancy would be moved and inspired to choose adoption? Maybe if we can stop demonizing and yelling at each other for long enough, we can work together to figure out how to prevent so many unwanted pregnancies….

This entry was posted in 4) All Of The Above and tagged Abortion, Adoption, Civil Discourse, Jesus, John Fugelsang, Love Your Enemies, Middle Ground, Pro Choice, Pro Life, Roe vs. Wade. Bookmark the permalink.

21 Responses to Finding A Middle Ground On Abortion