Christians and Torture: Why So Many Don’t Have A Problem With It

Torture has been in the news a lot recently… Though it is usually referred to by it’s more palatable euphemism, “Enhanced Interrogation Techniques.” The confirmation hearings for Gina Haspel (President Trump’s pick to head the CIA) have been focusing on the parts she played in waterboarding prisoners, as well as her recommendation that the tapes of those water boarding session be destroyed. Senator John McCain, a man who knows first hand about the inhumanity of torture after being tortured in Vietnam, just came out against her nomination, saying,

“I believe Gina Haspel is a patriot who loves our country and has devoted her professional life to its service and defense. However, Ms. Haspel’s role in overseeing the use of torture by Americans is disturbing. Her refusal to acknowledge torture’s immorality is disqualifying. I believe the Senate should exercise its duty of advice and consent and reject this nomination.”

McCain is one of very few republicans to come out against Haspel’s nomination on moral grounds. I don’t know why it still surprises me that the party which saw 81% of white evangelicals vote for a man who is so clearly immoral wouldn’t have a problem with torture. During the debates, Trump proudly said, “I would bring back waterboarding… And I’d bring back a hell of a lot worse than waterboarding.”

White evangelicals have warmed CONSIDERABLY to the idea of acts of immorality by their leadership, as shown by a study by the Public Religion Research Institute. In 2011, 30% of white evangelicals said that “an elected official who commits an immoral act in their personal life can still behave ethically and fulfill their duties.” By 2016, that number jumped to 72%. They might just be following the lead of hypocrites and charlatans and frauds like Franklin Graham, who in 1998 said, “The God of the Bible says that what one does in private does matter… If he will lie to or mislead his wife and daughter, what will prevent him from doing the same to the American public?” This week he is defending Trump, saying that his affair with a porn star and his lying to the American public about paying her off is “Nobody’s business.”

So I’ve been thinking about HOW IT IS that people calling themselves “Christians” — people who follow a man named Jesus… A nonviolent messiah, murdered by a violent instrument of torture — have become so morally bankrupt that they are now okay with something as objectively immoral and inhuman as TORTURE. And I believe it has a lot to do with their concept of God and their ideas about Hell (I say “THEIR” concept of God, instead of “OUR” concept of God… Not because I don’t consider myself a Christian, but because a “christian” who condones torture seems so totally incongruent and hypocritical that we must be believing in different Gods). But here it is: They believe in the God who tortures. And when you have a God who doesn’t mind torture, why in the world would you think the people who worship that God (and call that God “good“) would have a problem with torture? 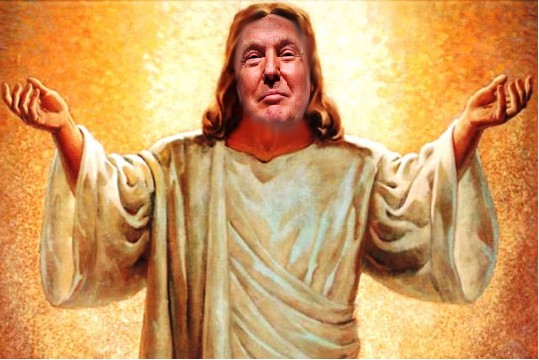 This might be the worst thing I’ve ever seen.

What a terrifying deity I grew up believing in… The god who hands out a sentence of Eternal Torture for the crime of 16 years of non-belief… The god who sends almost everyone who ever lived to a fiery Hell… The god who gives us the “good news” that YOU might miss out on this horrific fate, if you just believe exactly all the right things… The god who is powerful enough to make the suffering stop, but chooses not to. That god is powerful, yes… Powerful enough to do ANYTHING, they say… Powerful enough to even mercifully make it so that people don’t exist anymore… But doesn’t, right? How could we ever call that god “Good?”  And yet much of Christianity believes in a God who sustains the existence of the majority of people who ever lived in order to keep them in an eternal conscious torment. And they call that god “Good.”

So it makes sense that so many of these misguided, deceived people would have such a skewed understanding of “Goodness” that they would cheer for a man who promises them “a hell of a lot worse than waterboarding.” It makes sense that 81% of these people would vote for a man who lacks even the most basic human compassion. And it makes sense why they would vote to confirm a woman who participated in torturing prisoners, and then ordered the tapes of that abuse to be destroyed. They vote for a powerful monster who wants to be worshipped, because they believe that GOD is a powerful monster who wants to be worshipped… And they’ve been told that god is “good.”

Surely those who worship a tortured prisoner on Sunday will stand against waterboarding on Monday?

And yeah, I know, I’ve heard it before — Many people will try to make the theological distinction that “it is not GOD who is torturing these people… It is simply the natural result/consequence of the sinner’s actions.” Basically, they’re saying that it’s the fault of the person getting tortured (the sinner/Muslim accused of a crime), and not the fault of the one handing out the torture. Which sounds suspiciously similar to an abusive husband telling his wife, “You brought this on yourself.”

But God is not an abusive husband. God is not some sadistic deity who sends almost everyone to get tortured for the “crime” of not believing that a God who would do such a thing could ever be called “Good.” God is not a monster who sustains the consciousness of “sinners” to non-redemptively punish them forever. We were NEVER going to get it right… The Bible says we were made “a little lower than the angels,” and even THEY messed up. God is not a father who sends his son to get tortured and killed, because of rules the HE WROTE. THAT. IS. NOT. GOOD!

If Jesus knew anything about God, he knew that God is like a good parent… A way better parent than you or I could ever hope to be. Imagine hearing of a parent handing their kids over to get tortured. WHO WOULD EVER CALL THAT PARENT “GOOD?” It’s time we got our theology right. It matters. If you find someone with skewed beliefs about how there are “some very fine people on both sides” of a white supremacist rally, and if you find someone with some monstrous beliefs about the morality of torture, I guarantee you you can trace that back to some skewed, monstrous beliefs about the morality of God. When we call God “Good,” that MEANS something.

That you for reading. I sure love you people. If you value this blog, and you want to help support it, you can join a few other awesome folks and BECOME A PATRON. It means a lot. If you’d like to leave a TIP ON PAYPAL or boost a post, please do. Or, if you want to keep up with me on FACEBOOK or on TWITTER, click the links and like/follow/whatnot. Remind yourself every day what Goodness looks like, and then work for it, and live it out.

2 Responses to Christians and Torture: Why So Many Don’t Have A Problem With It