Thoughts On Praying For Miracles

When my wife was diagnosed with cancer, the doctor told us there were many people at the hospital willing to pray for us. I said, “I’ll take my prayers in the form of competent expertise.” I’ve been thinking about this a lot lately… A lot of you may already know that Rachel Held Evans has been in a medically induced coma for a couple weeks now. If you don’t know who that is, you should. She’s a lot like me, only she’s smart and successful and a really good writer. Folks on Twitter have started the #PrayForRHE hashtag to allow people to share their love & prayers during this scary time…

As a writer & a blogger & a Christian who went through deconstruction, it was only natural that I was introduced to the beautiful mind of Rachel Held Evans. She is one of my heroes. She has this way of saying things that feels so Fresh & True & Good. People would send me her articles all the time. Many of the things she wrote became a sort of Doubter’s Canon for people who had questions about their unraveling faith. The news of her health struggles have broken my heart. I just love her.

Before I was aware of the inherent danger strangers/men like me posed to people like Rachel, I think I messaged her something like, “We should totally be friends.” My feelings were a little hurt when she didn’t respond. Ha! As if she owed me a response… Anyway, I have looked on through tears as people post their prayers & well-wishes to her on social media. She is so universally beloved by people I respect, and so feared & reviled by people I can’t stand. And through all this, I have been thinking once again about prayer.

In the faith of my youth, PRAYER was the thread I started pulling on which led to the unraveling of my Sweater Of Traditional Christian Theology… An admittedly ugly sweater. I grew up in Church. I went to a Christian School, kindergarten through college. I was a Young Life leader. I worked at a Christian Camp. I did Bible studies. I did prayer groups. I did all the Christian things.

It wasn’t until I moved to Nashville that I had my first experience with a church that “believed in miracles.” For a while, we attended the sort of church that would tell stories about seeing angels, & limbs growing back, & the dead being raised. They were interested in the God of the Spectacular. I remember watching once as prayer team members were released, and they pushed past addicts & single moms to get to a person on crutches… In the hopes of seeing him spectacularly drop those crutches. One Sunday we worshipped late into the afternoon, as we received news that God had miraculously healed a woman of her ovarian cancer! We cried & sang & collected an offering.

When she died from cancer about a year later, no one mentioned it… 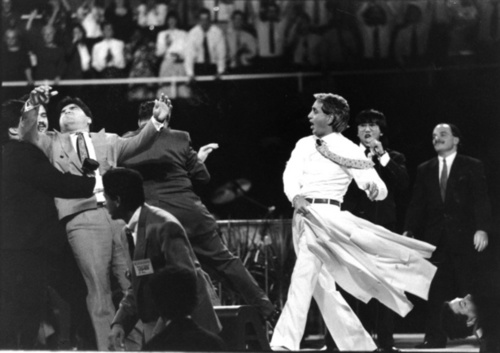 I work at a restaurant, & most of the people there know I’m a big fan of Jesus. A few years ago, a friend asked me to pray for her gravely injured brother to get better. I told her I would—even though by then I had stopped believing in that sort of prayer. I couldn’t sleep that night. He died soon after. I cried later as I told her that I didn’t really believe that is how God works. And that I didn’t want my prayer testifying of the God who COULD, but so often decides to NOT.

I feel like the #PrayForRHE hashtag is a net good… Seeing all of us beautiful misfits come together around loving RHE was inspiring. Certainly, the GoFundMe was a beautiful act of generosity & support & goodness. But there’s a part of this whole thing that is troubling me. And it came to a head for me today, when Nadia Bolz Weber—another important voice I love & respect—posted a tweet about praying for Rachel that said “We’re not asking nicely anymore, God.”

And I guess that’s my worry here: It feels to me like these prayers for healing paint a picture of a God on a throne… A God who has plenty of water for a kid dying of thirst, but who is like, “Sorry, you didn’t say PLEASE.” It feels like a physician who has the cure for a deadly disease, but requires the sick person to get 10,000 signatures first. Or to get a hashtag trending. It feels like being back at that Holy Spirity, charismatic church, and having to listen to people talk about “Storming the Gates of Heaven,” or “Holding God to his promises.” It feels like the bullshit that is “Name It & Claim It.”

It feels like “Everything happens for a reason” and “All part of God’s plan” and “God never gives us more than we can handle.” And if I’m being honest, it feels like the reason I can’t go to church anymore.

It feels like what led me to read Rachel’s work in the first place.

And please believe me when I say that I’m not writing this to try to steal anyone’s hope during this hard time. I am filled with hope. I realize these prayers can be comforting to some. But beyond this tragedy, I am worried about what these prayers say about God. If her brain isn’t healed, it’s because “God had other plans.” If her brain IS healed, then God healed it… Healed by the same God who was in control when this happened. And the same God who healed her brain still decided not to heal some little kid’s leukemia.

This is the God of “Have you considered my servant, Job?” allowing Satan to torture & murder an entire family because God felt like showing off. That’s the distorted picture of God Jesus tried to fix… And the same distortion the Still-Speaking Voice Of God still longs to correct.

I have no interest in a faith or a theology that is not intellectually honest enough to deal with the Problem of Pain without deferring every answer to some supposed omnipotence, while simultaneously refusing to address the inherent immorality of inaction.

I am done worshipping “The God Who’s In Control Of Everything.” I’m done with The Volcano God, who requires a sacrifice. A VIRGIN sacrifice. The God who hears us if we’re pure enough. Or ENOUGH enough. The God who moves mountains IF we just have faith like a mustard seed. Because “The God Who’s In Control Of Everything” quickly becomes a monster… ESPECIALLY to those who are oppressed. When we ask for the mountain to move, I believe in the God who hands us a shovel. Not because God WON’T, but because God CAN’T.

As my wife & I raise our 3 kids, we are trying to give them as little theology as possible that they’re going to have to deconstruct later. If they hear a prayer from me, they won’t hear me pleading with God to do a miracle… They hear me acknowledging that the God of the universe binds us together in love… That God is in us all, and that Gods knows what it’s like to feel powerless and forsaken… That we love God best when we love & take care of each other… But you will NEVER hear me testifying—with my words or my prayers—of the God who COULD help, but doesn’t. That God might be powerful, but we could never call that God “Good.”

And if God’s not Good, then what’s the damn point?

Thank you for reading. This was initially published as a Twitter thread, but I wanted to make it available to those of you who aren’t on Twitter. I have written a few different times about this stuff. If you’re interested, here’s one: “Fun With Cancer” (by the way, my wife is cancer free now… So that’s a really good thing). Another one is “God Had Nothing To Do With This.” One more is titled “When Prayer Is Worthless: Some Thoughts On The Cold Weather.”

If you are a person who loves this blog, and you’d like to help support me and my writing, I’ve got some good news for you: YOU CAN! You can BECOME A PATRON and give a little each month. You can LEAVE A TIP ON PAYPAL. Or you can simply follow me on Facebook and on Twitter, and share the stuff you love with your friends. I am so honored that there are people in the world who value what I write here. THANKS AGAIN!

This entry was posted in 1) Jesus and tagged #PrayForRHE, Benny Hinn, Doubter's Canon, Everything happens for a reason, Faith healing, God hands us a shovel, God's Plan, Name it & claim it, Prayer, Praying For Miracles, Rachel Held Evans, Storming the gates of heaven, The Goodness of God, The problem of pain, Theology. Bookmark the permalink.

20 Responses to Thoughts On Praying For Miracles